The Yuan march into Tongling totally unopposed. Their scouts had reported a Song army in the area, but now they find not a single man defending the city. The infantry are permitted to celebrate the victory, and they raid the city's warehouses for rice wine and liquor while the Mongol cavalry camp apart from the festivities, preferring to neither see nor hear them.

Unknown to them, Jibi Zhenghu hides with 8000 spearmen just two li south of the city. Around two in the morning, he moves his men up and attacks the infantry camp head-on. The fighting is bloody and close-quarters, and even without their cavalry the Yuan outnumber the Song, but surprise and sobriety win the day. The Yuan make a stumbling retreat to their cavalry, and rather than launch a counterattack, the Mongols leave Tongling for the west. 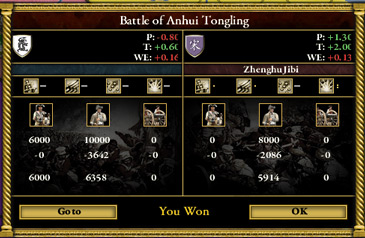 The White Lotus Army rides into the area days later. Han Lin'er can't contain himself when he sees Zhenghu waiting outside the city for his arrival. He exclaims how overjoyed he is that he managed to beat the Yuan to the city.

Lin'er and Zhenghu combine their armies and lead them into Dahan territory, in pursuit of the Yuan army. They find their enemies weak, demoralized, and starving. A Dahan contingent joins the battle in progress, but they are hardly necessary, and the Mongols are wiped out.

With another 35000 Yuan marching for Red Turban territory, Lin'er takes his army north to defend the Song border. He orders Zhenghu south to bolster Song expansion along the coast.

Soon after the White Lotus Army settles in to defend, a rider comes from Zhenghu's camp with a letter.

"'Should I fight for the provinces?'" Lin'er crumples the note up and tosses it to the ground. "I didn't think the boy an idiot. Of course he should. If he needs more men to fight the Yuan, tell him to simply request them and not waste my time wi—"

"Sir, he—I don't think he can write, many of us can't, the author might have..." The messenger stops, tries to collect his thoughts. "Sir, we aren't fighting the Yuan. The local people have risen up in arms, in opposition to us, and declared their own kingdom. I was sent to ask whether we should put down these revolts and—"

Lin'er jumps to his feet, eyes wide in shock. "No! Order him to stand down. Protect the rebels from the Yuan if they attack. Go! Go now!" The messenger turns, sprints for his horse, and rides out of the camp. Zhenghu, when he receives the order, is relieved it wasn't any other. 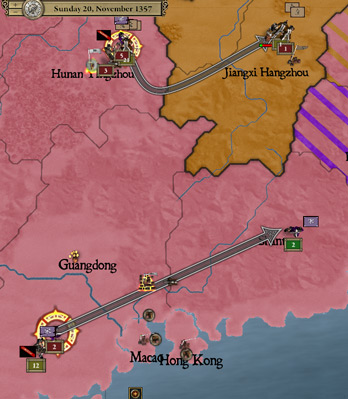 Once his blood cools down a bit, Lin'er eases back into his seat. A serene smile spreads across his face. "On their own," he murmurs to himself. "They rose up on their own, for themselves. How... how spectacular." 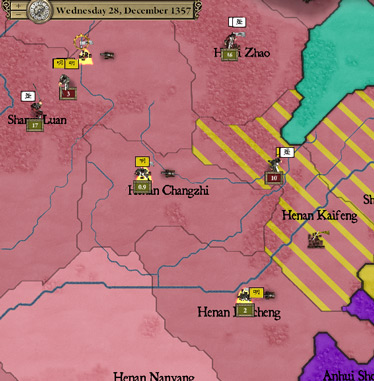 But as for his neighbors to the north, Lin'er isn't so generous. Zhu Yuanzhang extends his armies across enormous swaths of land, and the advancing Yuan win battle after battle. Lin'er refuses to help. Part of it is for simple military reasons. The Zhizheng Emperor still commands far more men than the Red Turbans, and their only hope for victory lies in defending what they have and waiting for a weakness to exploit.

But at the same time, Han Lin'er worries about the emergence of a strong Ming Kingdom. The Mandate of Heaven is a powerful idea, one that has existed for over 2000 years. There can be only one Emperor of China. Once they force the Yuan back to Mongolia, once only the Han factions remain, one must arise above all the others. Any of them could win the struggle, of course, but Lin'er knows Yuanzhang's brilliance, knows his ambition, knows his ruthlessness, and despite their outward friendship, there is no man in China he fears more than that man. 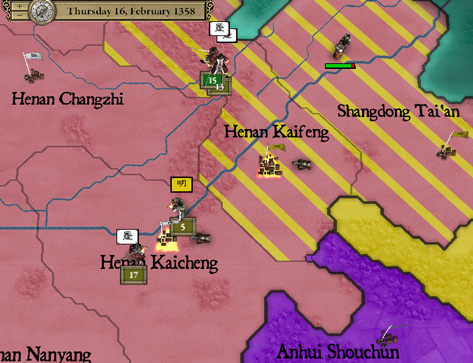 The dynasties are like humans, in a way. They're born weak and vulnerable. As they age they grow powerful, extend their reach, seemingly control the world. But then they become weak again, old and feeble, decaying from the inside. And when they die, a new generation stands ready to take their place. This will occur for all time.

Deep down, Lin'er wishes it didn't have to be so. He wishes the factions could find some way to coexist as kingdoms, to live in harmony. To take the Middle Way between total integration and all-out civil war. But it won't happen. China will always come together, then always fall apart. The Mandate cannot be challenged. Can it?

Lin'er falls back to reality. A spindly man stands before him, bowing his head in deference.

"You're not one of mine. State your business."

"I heard of what you did in the south. The Yue rebels. Most admirable. I come offering my... services. If you wish, and with your financial backing, I believe I could stir up a similar revolt in Chengde."

"Chengde? That's right outside Yuan's capital. Can it be done?"

"I have eyes and ears where you do not. The Yuan throw too much of their weight here. The interior is ripe for rebellion. All I need is the funding to make it happen."

Lin'er doesn't trust the man, pegs him as a con-artist, but gives him the money he needs anyway. The four major Red Turban factions are still the only players in the war. Daxia shuns it, thinking their remoteness will protect them, and instead fights its neighbors in Southeast Asia. Zhou refuses to go to war. He Zhen fields less than 2000 men. So this spy's potential relief is impossible to refuse. His offer turns out to be genuine, however, and soon word spreads of a peasant militia rising up under the Qin banner. 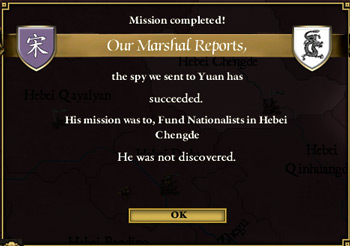 By July, Han Lin'er's defensive stance proves to be a mistake. The Ming push back against the Yuan. They've officially annexed Tai'an, and Ming armies control or besiege every province on Song's northern border. Lin'er is totally cut off from expansion. While he sits and broods, a very unexpected visitor rides into the Song encampment.

Lin'er sets up a table, and fills two cups with baijiu.

"You know," says Yuanzhang, ribbing him, "I could have sworn drinking alcohol broke the Fifth Precept. I know how you Buddhists can be about that."

"Ha. Well then, here's to a successful one."

"Yuanzhang, I'd gladly sit here and make small talk with you until dawn. But we may as well not dance around it. What, exactly, are you trying to do?"

"I prefer the simple things, really. All I need i—"

"Cut the bullshit! We all agree to fight as one, then you start the war yourself and demand we let you dictate the terms of peace. You send your entire army to Anhui and try to cut me in half, then abandon the area when the Yuan march into it. Now you use your forces to surround my territory so if I expand further I have to go through you. We fight the Mongols together, but it seems more like you're at war with me!"

Yuanzhang leans back in his chair and takes a sip of liquor. "Honestly, Lin'er, I don't know how you drink this vile stuff." He sets the cup on the table and folds his hands. "You really are without guile, aren't you?"

"I have honor, I follow a moral code, and I'm a man who can be trusted. I just wish I could say the same of my friends."

"Listen to yourself talk. You sound like you actually believe your followers when they say you're the Maitreya."

"Honor and morals have nothing to do with it. Today we're rebel leaders, but tomorrow we'll be rulers. And rulers do what's best for their people."

"Yuanzhang, are we still allies?"

A smile spreads across the man's face. "Yes. And we will always be allies, until we are not."

They spend an hour or two discussing logistics, sharing intelligence, dealing with the minutiae of the war rather than the big picture. After Yuanzhang leaves, Lin'er yells for one of his assistants.

"Send a diplomat to that merchant rat in Zhou," Lin'er says. "I want military access, and I don't care what he says. I'm getting it."

"Yessir. But, if you don't mind my asking, why do we need it? His territory is only that tiny peninsula."

"Because it's on the way to the Yuan capital."