Zhu Yuanzhang conquered the city of Nanjing in 1356. Although he'd spent years pledged to a Buddhist monastery and rose to prominence fighting for the Red Turban Army, he discarded his past and promoted himself as a champion of Confucian values. Disenfranchised scholar-bureaucrats flocked to the Ming court and built it into an efficient, organized government. With civil war tearing the countryside apart, Nanjing became an oasis of stability that attracted tens of thousands from all across China. By the time of Yuanzhang's death in 1359, the city eclipsed even Hangzhou as the most populous in the Middle Kingdom.

With Nanjing's explosion of growth and prosperity still fresh in their minds, the men in charge of the Song government each arrive at the same conclusion: nothing would benefit the kingdom more than dismantling the White Lotus Society.

Prime Minister Wangyi and Marshal Wongkwai at first work in secret. They dare not bring the idea to Wangdue. Although the chancellor has proven himself quite the pragmatist, he remains a devout Buddhist. And while the White Lotus and Red Turban millenarianism has little in common with Wangdue's "purer" practice, the man could conceivably balk at destroying the Buddhist group that backed Han Lin'er in the first place. Zhenghu... well, they already know what Zhenghu will think. The young "general" deludes himself with fantasies of being Lin'er's spiritual successor. Although they've kept the barely-literate peasant marginalized at court, if he manages to discover their plot, he might do anything to stop it.

The end of a war necessitates a flurry of paperwork. Soon after Queen Li's departure, Wangyi manages to amend the Ministry of Rites' official priesthood registers without catching the censors' attention.[1] The change strikes the White Lotus and Red Turban groups from the "approved" list of Buddhist sects and reclassifies every priest and monk registered under those categories as a heretic. He goes one step further and revokes certain land grants Lin'er made to his supporters, redistributing them to less politically inclined peasants. 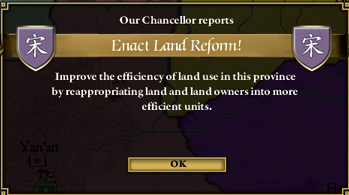 Wongkwai focuses on the military. He personally detests the idea of mass conscription. Fodder, in his mind, can be got whenever necessary, and the minuscule difference between a poorly trained and an untrained soldier hardly justifies the effort. To this end, he slashes the size of the army and institutes brutal training regimens meant to transform those left into professional warriors. Uncoincidentally, most of those drummed out of service are Red Turbans, who arrive "home" to find their lands are no longer theirs.

The marshal's heavy-handedness wrecks the stability of the Song Kingdom, and Wangdue orders the Censorate to launch an immediate investigation. Wangyi and Wongkwai come clean with the chancellor. To their relief, he agrees with their methods, although they receive a lengthy tirade about going behind his back.

But with the disenfranchisement of the White Lotus Society now official government policy, it isn't long until Jibi Zhenghu finds out.

Zhenghu bursts through the door to Wangdue's office, face sanguine, eyes about ready to burst from their sockets. "What the hell do you think you're doing?"

The monk sets down his brush and turns in his seat to face the man. "I was just drafting a decree, actually, if y—"

"Calm yourself! If you have something to say, then say it! But if all you plan to do is babble like an idiot, then stop wasting my time."

"Who branded the White Lotus Society as heretics? Who expelled them from the army and stole their lands? That's all I want to know. If it wasn't you, then just tell m—"

"It was me." Better to take responsibility than let others think they can get away such subterfuge.

Zhenghu glares a hole through Wangdue's skull. "You... you bastard! If Lin'er wa—"

"Lin'er is dead! And if it wasn't for me, this kingdom would have died with him."

"I'd rather see it burn to the ground than stay in your hands."

Wangdue recoils from the young man. He'd watched Zhenghu grow more and more disillusioned since his mentor's death, but Wangdue hadn't suspected the zealotry could run this deep. Although Lin'er himself was an idealist, he still listened to reason when necessary. But this fanaticism... for the first time, Wangdue appreciates what a threat the cults really are.

"Zhenghu, do you mean that?"

"Yes." He doesn't even pause to think.

Zhenghu lunges at the monk. He tackles him. They crash to the ground. Zhenghu presses his knees into Wangdue's chest and his thumbs into his windpipe. Two guards rush in. One clubs the back of the young man's head with the pole of his spear. Zhenghu's grip on Wangdue's throat loosens. Wangdue pushes the unconscious man off his chest and stands, brushing the dirt off his robes.

"Yes, I'm fine." He pulls a hand-mirror out of his desk drawer. Two round, purple bruises glow on his neck. "Bring this one to State Affairs. Have them strip him of his rank and banish him to the countryside. I don't want to see him in Hangzhou again."

The guards bow and drag the limp body away. Wangdue picks up his chair and sits at his desk. Unfazed by the boy's attack, he draws up three royal decrees, his brushstrokes steady and firm. The first two merely revise official state dogma. The title of Maitreya Buddha is tied to the Song throne and passes down the line of succession, and the White Lotus Army derives its name from Confucian roots. The third, however, carries far more weight: "Any who adhere to the treasonous, vile, occult beliefs of the White Lotus or Red Turbans are to repent and join a sanctioned Buddhist denomination. Those who do not will either leave the kingdom forever, or face death." 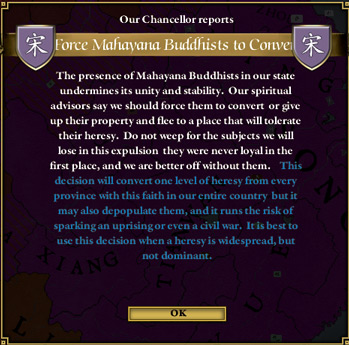 The Ministry of Justice's secret police work with the reformed White Lotus Army to carry out the brutal inquisition. Most of the heretics are more than willing to recant, on account of the young movement's political nature and its messianic prophecies having been disproved with Lin'er's demise. The few ardent believers are rounded up and marched west. But in November, a small force attacks the procession's light military escort and rallies the exiled Red Turbans as an army. And at the head of that army is Jibi Zhenghu. 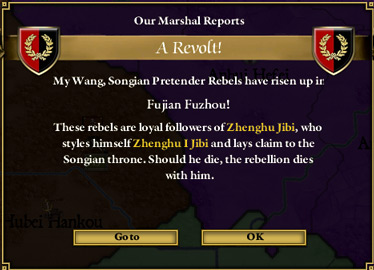 Zhenghu's pitiful attempt to seize the Song throne is cut short by Wongkwai and the White Lotus Army. Although many of Zhenghu's rebels had served during the war against the Yuan, they prove no match for Wongkwai's modern, efficient, and masterfully trained army. "Capture their leader alive," the marshal tells his troops before the inevitable victory. "I want to see what the chancellor will do to him."

After the battle is won and most of the rebels have been slaughtered, Wongkwai's soldiers bring him Zhenghu. The young man actually tries to win Wongkwai over, speaks of overthrowing the "paper-pushing bureaucracy" and putting the military in control of the kingdom. The marshal laughs in his face. "All I ask," he says, "is that a kingdom tell me who to conquer. Why would I care to run the system myself?"

Wangdue Sengge sits upon the Song throne when the guards tell him the prisoner has arrived. Zhenghu is thrown at Wangdue's feet. The impetuous young man stands up, bound in chains, and stares at the chancellor with deadened eyes.

"So," Wangdue says, pulling at his own beard, "do you have anything to say?"

"I haven't yet decided what to do with you," Wangdue says. "And I would find it distasteful to imprison one who fought to found this kingdom."

Zhenghu spits on the palace floor. "Tell that to those you exiled."

"Recant, Zhenghu, and I will welcome you back. Denounce the... dangerous cult you've aligned yourself with. We can put this behind us. You can have everything you used to have, and more."

"Then I must have you placed under arre—"

The boy tuts and shakes his head. "Wangdue. If you banish me, I will return. If you imprison me, I will escape. You've aligned yourself with demons, and I will never stop until this kingdom is set right!"

Wangdue stands and points at the young man. "God damn it, Zhenghu! Do not force my hand!"

"There's nothing you could do that would make me throw away everything I believe in."

Wangdue steels himself. He'd been honest when he said he wanted to spare the boy. Despite the assault two months ago, despite the insurrection, Zhenghu is a hero of the Song Kingdom. But, if he has no other choice...

"Very well. Under the authority vested upon me by the Song Kingdom, I hereby sentence you to death by beheading."

Zhenghu grunts. "Is that the best you can do?"

"Let there be no record of the execution of Jibi Zhenghu. He died as he lived, fighting those who would oppose the authority of the kingdom. Sadly, he was slain in battle, leading his troops against the White Lotus insurgency. So be it."

The young man's eyes widen in shock. "No!" Two guards grab him by his arms and begin to pull him out of the room. Zhenghu shakes them off for a moment. He yells, "You can't do this, Wangdue! You can't change history!" The guards restrain him and drag him away.

"I can do anything I want."