The Mandate of Heaven is something of a tautology. Uniting the Middle Kingdom demonstrates possession of the Mandate, because without the Mandate, one cannot unite the Middle Kingdom. To the people, the current success of the Red Turbans indicates the Yuan Dynasty has lost the favor of Heaven. And whoever conquers the Yuan and unites China will necessarily possess it. Thus, it matters little to ordinary people which faction wins, whether it be Song, Ming, or any other. In fact, if the Zhizheng Emperor crushes the Red Turbans and reestablishes Yuan hegemony, it will be taken as proof that he managed to regain the Mandate, and he will again be accepted. Legitimacy begets victory, and victory begets legitimacy.

With this in mind when the war started, Han Lin'er had envisioned himself working from Hangzhou to establish some form of Song jurisdiction over his territories. He thought his militias could secure the frontier while he curried favor with the populace, winning them over to his side through sound governance and economic prosperity. But the latest report from the front shakes his confidence in this approach.

When last I wrote, my view of the situation on the front was cautiously optimistic. Although the Zhizheng Emperor quickly forced a concession of defeat from the Chagatai hordes, his forces took months to march on our lands. And despite the First Army's failure to move north until February, our superior numbers were able to break the siege on Tianwan's capital in Hankou. 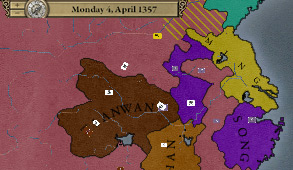 Now, I do not have such confidence. The emperor commits more troops to the area every day. Yuan lays siege to our holdings in Anhui Province and controls a full two-thirds of the Tianwan Empire. By last count, the Great Yuan have moved 40000 men to our region, and rumors suggest there may be more on the way.

But if we are to lose this war, I believe it will be due to our own armies rather than Yuan's. Our sieges in the east are reduced to 3000 men, with Ming forces standing by to resume them in Zhu Yuanzhang's name should we fail. The commanders prefer to do nothing. They quarter the First Army in allied Hankou while the Yuan surround us; a decisive Song attack could cripple a portion of the enemy forces, but combined, they are unbeatable.

I do not presume to doubt your judgment in appointing these men to lead us. However, I feel their leadership of the guerrilla actions two years ago did not prepare them for this. They do not understand the tactics of conventional warfare. None of us do. We are peasants and fishermen, merchants and laborers. We are not generals or soldiers.

Any advice or guidance would be invaluable. The men may yet rise to the occasion if only they knew how to proceed.

Han Lin'er has read the letter three times now. He hold it a few more minutes, then puts it with a pile of other assorted paperwork on his table. Resigning himself, he scribbles a sentence on a blank sheet of rice paper and stamps it with his official seal.

"Wangdue," he calls into the next room, "could you come here a moment?" The Tibetan shuffles into the room, ledger and brush still in hand. Lin'er knows better than to have Wangdue begin the spread of Buddhism until peace is achieved. In the mean time, however, the man has proven more than capable serving as a minister of the state. And unlike many of Lin'er's other advisors, Wangdue is blunt and brief, almost to the point of disrespect. But in these times, pragmatic concerns outweigh the imposition of courtly etiquette.

"Have a rider dispatch this to the First Army immediately. In a few days, I'll be able to—"

Wangdue, cocking an eyebrow, cuts him off. "Is this wise?" He gestures at the note, as if it isn't obvious what he means.

"Perhaps not. But it is necessary."

"You don't belong on the front. Our hopes of a new Song Dynasty rest on your... continued existence. Without an adult heir, or any heir at all for that matter, your line goes extinct with your death, as does everything we have built."

Lin'er considers disputing the "our" and "we," but decides against it. "There is no alternative. I trust you can manage the state in my absence."

"Of course. Just remember what your life means before you attempt any daring heroics." Wangdue rolls up the letter and walks away, then turns back. "You spend too many nights working in this courthouse. Before you depart, it would be prudent to... enjoy your wife's company. For the good of the people, of course."

Lin'er laughs at hearing this from the holy man. "Don't worry. I plan to."

Han Lin'er arrives in Hankou on the 20th and finds the situation to be exactly as Zhenghu described it. The commanders tell Lin'er they thanked Heaven when his note was read to them, and admit they said nothing out of fear of reprisal. "Consider this your warning," he tells them. "In the future, an honest confession of incompetence will be handled with grace. But any who attempt to conceal their incompetence will be dealt with harshly." The discussion ends there. Lin'er takes command of the First and dubs it the White Lotus Army. Overruling the boy's protests, he assigns 5000 men to Zhenghu and orders him to Anhui Province to reinforce and take command of the siege of Tongling.

What follows will be known as one of the greatest military campaigns in Song's history: The Jiachi March.

The commanders had foolishly stationed the entire army in Hankou, and with much of Tianwan's farmland under occupation, many Song troops starved alongside Hankou's residents. So when Han Lin'er begins his campaign, his 24 regiments have barely 17000 men between them. The Yuan military hold a staggering numerical advantage: 10000 in western Tianwan, 21000 in northern Song, and another 16000 marching down from the Yuan capital. Yet these armies are divided, and they lack effective leadership. Despite being outnumbered two-to-one, Lin'er goes on the offense, and he begins in a most unusual way: by marching south.

Lin'er knows that if the scattered Yuan armies link up, their numbers will make them unbeatable. By moving south to Changsa, he exploits the relatively short distance to the first small Yuan camp in Tianwan. His armies eliminate their paltry 3000 before they can retreat, and he continues north.

The remaining imperial forces in Tianwan order a retreat with the White Lotus Army only days behind them. Lin'er catches them outside the city of Nanyang, but a huge force of Mongol cavalry ride down toward the city from the north. Lin'er outflanks the inexperienced commanders in Nanyang and annihilates the full 7000 just days before the main force arrives. Hearing their comrades have been utterly defeated, the Mongol force turns northeast and instead rides for Ming-occupied territory; the Song men all hoot and cheer when they see the cavalry fade out on the horizon. And, in a coincidence only Heaven could engineer, word comes that Jibi Zhenghu's forces captured the vital southeast part of Anhui Province just hours before the White Lotus Army's victory at Nanyang. 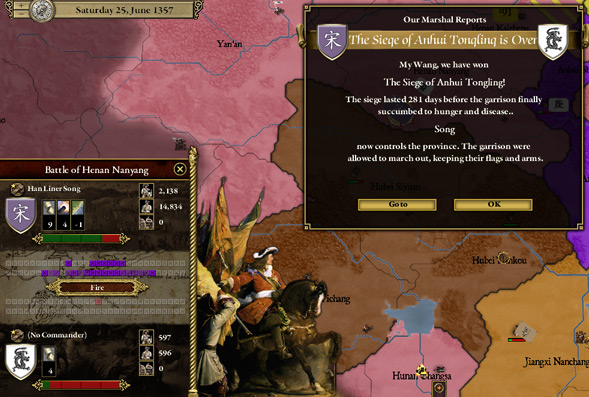 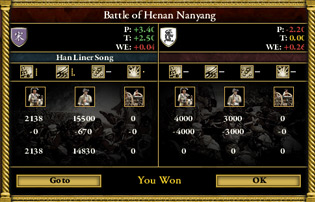 The runner also brings news from the capital: Lin'er's wife is with child. She is due to give birth within a month. "At that moment," he later writes, "I felt as if the Supreme Buddha himself had appeared and declared me Emperor of the Middle Kingdom. I do believe it was the happiest day of my life." But the revelry is short-lived. On the outskirts of Yuan territory, and with 18000 enemy troops still laying siege to western Anhui, Lin'er camps his armies for the night and they march at dawn. 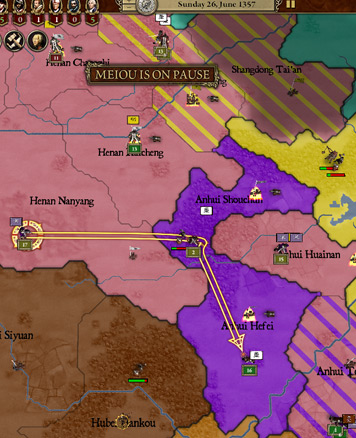 Lin'er advances on Anhui Province, and the two Yuan regiments quickly retreat to join the main force. Meanwhile in the north, the Ming attempt to isolate the Mongol cavalry division that had threatened to attack Lin'er at Nanyang, but the Mongols charge west in a bid to break free. Two Song regiments in northeastern Anhui continue the siege in Lin'er's name despite 13000 Ming troops claiming the region as theirs.

As the White Lotus Army liberates northern Anhui, it seems as if the final objective of the Jiachi March is just within reach. Lin'er's brilliant maneuvering allowed him to crush the scattered Yuan battalions in the west, then cut Zhizheng's Mongol cavalry off from reinforcing Anhui. And just like a jiachi trap in weiqi, he gave Yuan's Anhui army ample breathing room but no actual escape route. Emboldened by these victories, praised daily by his men for his genius, he lets pride cloud his judgment and commits an enormous error.

After having defeated 10000 Yuan soldiers with under 1000 casualties of his own, Han Lin'er considers the war in the south won and makes the mistake of marching directly on the main Yuan army in Anhui. However, word travels faster than Lin'er's armies, and scouts report the bulk of the enemy forces now move on Jibi Zhenghu's position. They leave a token resistance: not enough to threaten the White Lotus Army, but enough to delay them until Zhenghu's unit is wiped out. 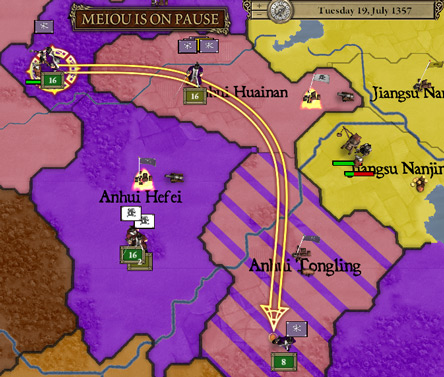 Lin'er hastily changes direction, hoping to avert a Yuan attack on Tongling and save the boy's life. But he won't reach the city for three weeks, and the Yuan continue their advance. Lin'er gives his own horse to the White Lotus Army's best rider and dispatches the man to warn Zhenghu. But the boy will have almost no time to prepare for the impending attack, and he commands a force only half the size of his enemies'. Lin'er can't help but fear for the men in Tongling, and he prays that sending Zhenghu to siege the city didn't condemn the boy to death.