In the autumn of 1363, war rages across all of China. Jurchen warriors conquer and pillage the Mongolian steppes. Korean patriots strike north to reclaim the rest of their peninsula. Mighty fleets from faraway southern kingdoms sail into the Yellow Sea; they land troops on the last remaining strip of Yuan coastline and battle to establish a foothold in the Middle Kingdom. Thousands of rebels rise up in the west. Those in the Yuan territories succeed in fighting off the increasingly powerless emperor. Tianwan brutally suppresses the uprisings in its own realm. And every other Chinese kingdom has now been drawn into Consort Li's war. 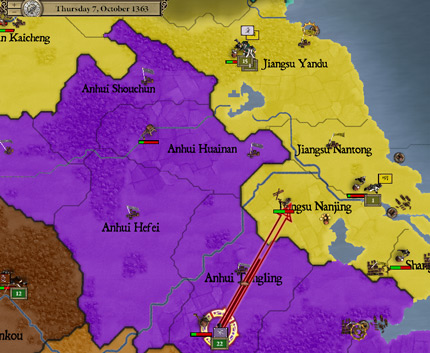 Poised on the Ming border, Wongkwai leads his forces toward their capital the moment he receives word the war is on. The city is prepared for his arrival. As he sees it, rather than fighting him in glorious combat, cowardly Ming archers and rocketmen defend from the newly reinforced stone walls. He leads his men in a full-on assault; it fails miserably and costs several thousand lives. Wongkwai has no choice but to siege the city from a distance.

With her main army down in Yue, Consort Li becomes trapped in Nanjing. She has not left her kingdom's security entirely in the hands of her smaller divisions, however: the Zhou merchant-king leads a force of fifteen thousand to defend her. By the end of October, the number of Zhou troops in Song is nearly double that.

Unfortunately for Li, she had seriously misjudged Zhou's objectives. Ever the opportunist, the merchant-king sends one of his chief ministers to the Song encampment in Nanjing with an offer: in exchange for more than half of Song's treasury, Zhou will exit the war. 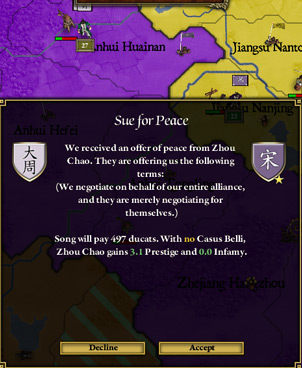 Even the price demanded proves to be a feint. After a mix of barter and threat, a more reasonable sum of seventy-five taels of gold is settled upon. The Zhou forces march home, now having won two wars without fighting a single battle. 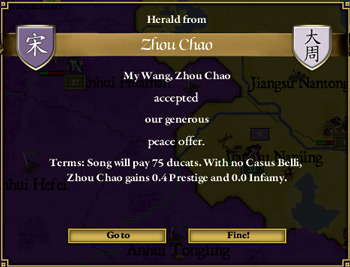 Nevertheless, Ming armies strike out across the vast, unprotected Song border. Wongkwai is forced to move the bulk of his men to fight them off. Stewing over what he sees as a needless distraction, he develops the inklings of a plan to drastically shorten the northern front and ensure Hangzhou's safety, whatever the cost. 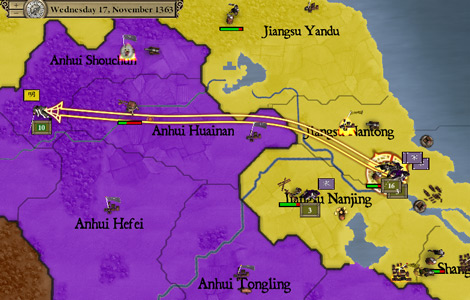 Han Lin'er camps his army a few li outside the Yue capital, within sight of the Ming armies. When the White Lotus Army marched into Guangdong Province, the Ming temporarily halted their siege and prepared for battle. Lin'er, instead, sent one of his officers to propose a parley. He patiently awaits a reply from their commander.

Minor skirmishes with the Yue and a lack of supplies leaves Lin'er's opponent in a weakened state: prevented from splitting their men and seizing all of Yue, the Ming have nearly twice as many troops as the land they occupy can support. Lin'er hopes to save the Yue kingdom without bloodshed by negotiating a withdrawal of the Ming forces.

Within a few hours, their general rides to the middle of the field with a small retinue and under a neutral banner. Lin'er gathers a few officers and guards and does the same.

The old Ming general bows deep upon Lin'er's arrival. "King Lin'er. It is an honor to meet you once again."

Careful to mirror the man's courtly sense of etiquette, Lin'er responds, "Truly the honor is mine. Please forgive me, as I am foolish and forgetful, so I do not recall when we have met before."

"It is no fault of yours, as I am insignificant and quite forgettable a person. I led my kingdom's armies against the Zhizheng Emperor at Baoding. Your fortuitous arrival won the day and saved our honor and our lives."

Lin'er brightens immediately. "Of course! Your army held fast against impossible odds. Truly a credit to your skill as a leader."

"No, no. Holding fast is foolhardy and useless without a brilliant ally to ride in and push back."

They exchange several more social niceties before the pretense is dropped and Lin'er moves the conversation to business.

"I called a parley in the hopes we could prevent this battle and work out a ceasefire. My only interest is in the preservation of the Yue Kingdom. We would stand down, and allow your men to withdraw to Dahan."

"But, naturally, we would be disarmed and march away in disgrace."

"No," Lin'er says. The old man raises an eyebrow at this. "We both march away. Your men keep their arms, as do mine. The Yue withdraw from Dahan, and the status quo is preserved."

The general chuckles at Lin'er last sentence. "I trust you to uphold your bargains. But Yue fought and bled for two years in the face of Dahan's aggression. Now they've shattered their enemy. Soon they will extinguish the kingdom and simply add its lands to theirs."

"Never. I would never allow it."

"Then you are more noble than most on this Earth, and it would be a privilege to serve under you in another life. Yet I must refuse your offer. My duty is to my king, and by extension, to Queen Mother Li. I have been ordered to fight for this city, so that is what I must do."

"You know your orders are unjust! An evil woman has usurped the Ming throne, and she mea—"

"Young man," the general says, his eyes narrowing, "no one can survive in this world for long seeing everything in black and white. You must learn to recognize the shades of gray." He bows. "May we fight with honor."

The battle goes on for days, and despite being underfed and outnumbered, the Ming put up a strong resistance. In a desperate attempt to break the Song ranks, the old general personally leads a massive cavalry charge. It ends in disaster for the Ming. Their leader dies with his men, and the White Lotus Army emerges victorious and saves the Yue capital. 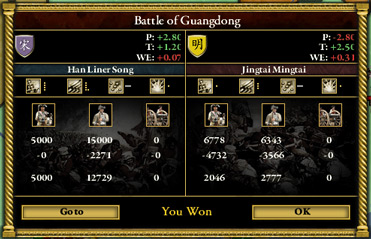 Lin'er pursues the retreating Ming, and after a series of smaller battles, manages to force those few remaining alive to surrender. He orders his men not to celebrate. "We're not fighting our enemies," he tells them, "but our brothers. This is grim work we do. But it must be done: not to subjugate, but to set right." The captured Ming are made to pledge not to take up arms again, then Lin'er lets them go free. Tired and solemn, the White Lotus link up with Jibi Zhenghu's force in Dahan and proceed north.

But while Lin'er preaches understanding and compassion, Song Wongkwai prepares to unleash his new "strategy." 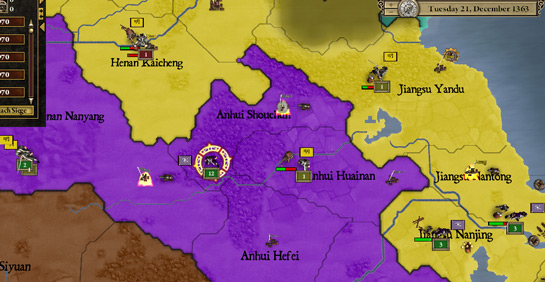 Wongkwai became a general for the Great Yuan like his father before him. But despite a strict martial upbringing and education, Wongkwai spent his entire career fighting peasant militias, religious extremists, and other petty insurgencies. His father taught him doctrine, tactics, grand strategy. His father told tales of glory and conquest. Then the Zhizheng Emperor used him as goddamn policeman. He thought he'd be trapped in that decaying empire forever.

His mouth creaks into a smile. But now he can lead a real war. He can conquer enemy lands, crush their armies, subjugate their people, make a name for himself like his father did in Korea, in Champa, in Dai Viet... But the border... He wastes his time patrolling it, fighting the Ming away, they always come back with more, he's too tied down, needs flexibility... If only he didn't need to defend, then he could attack. What to do, how to manage... Wangdue should be easy enough... just a small lie, a little half-truth, the monk wouldn't know, then, then he'd be able to...

Marshal Wongkwai,
If the situation on the northern front is as you say it is, do what you must to protect the capital. The White Lotus Army should arrive by April to take command.
Wangdue Sengge, Chancellor of the Secretariat

That gives Wongkwai four months in which to transform the nature of the war. He doesn't waste a day. Claiming a mandate to take any means necessary to defeat the Ming, Wongkwai whips his troops into a frenzy. They rampage across the countryside burning villages and crops, poisoning wells, looting what they please, and cutting down any who stand in their way. He does it in the name of defending the Song border. And he does it to the Song people themselves. 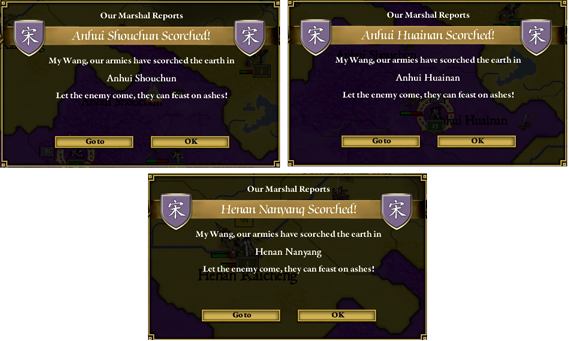