Zhenghu slides his chair closer to his king. "Sir... there may be some value in the monk's words. Ming and Dahan have had two years of peace to rebuild their armies. We've had less than a month. We can't go to war just yet."

Lin'er doesn't respond. He sits with his head in his hand, gazing off at the room's far wall.

"Zhenghu," he says, after several minutes of silence, "am I unfit to be king?"

The question takes the young man by surprise. "What? You led these people to freedom, no one else could—"

"You and Wangdue tell me a war with the Zhu family would destroy us... but I would have started one. I was ready to lead us to battle this very day. I don't have the... the skills to rule, I don't know how to—"

Zhenghu chuckles and shakes his head. "Sir, that's what men like Wangdue are for. Let courtiers and bureaucrats worry about how to do things: a king's role is to dictate what must be done."

The very next day, Lin'er officially names Wangdue the Chancellor of the Secretariat,[1] and they begin planning the buildup to war.

Securing Tianwan's neutrality trumps all other concerns. Without them involved, the war against the Zhus would be difficult; with them, it would be utterly hopeless. Hoping to turn the Zhu brothers against each other, Wangdue pens a reply to Dahan's call to arms which Lin'er reluctantly seals. It promises to fight by their side, "Not only in this campaign, but all the Dahan Emperor's upcoming wars to unite southern China." The letter's delivery is entrusted to a suspected Tianwan spy.

Tianwan diplomats pour into the Song court within days, denouncing Dahan's "reckless war of aggression" and obliquely hinting that they may intervene against the Song-Dahan alliance. Lin'er, somewhat surprised the ruse actually worked, feigns capitulation to their pressure, dishonors Dahan's call, and reaffirms his alliance with Tianwan.

Wangdue also recommends reorganizing the military into a strict hierarchy, much like how the bureaucracy is already set up. The king is placed at the very top and given full authority over the army. 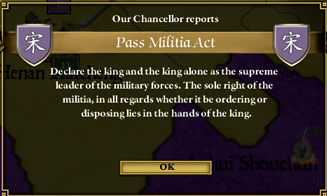 But although Lin'er is made the supreme commander, a field marshal must be created under him to oversee operations and training and to command a second front when war is declared. Lin'er immediately offers Zhenghu the position, an act Wangdue vehemently opposes. He argues, in front of the young man, that it must be an ex-Yuan commander. "Naturally," he says, "they should be of Chinese parentage. But we need a true general, and there are many Confucians to be had with decades of experience."

Lin'er insists on the boy, both because of his loyalty and his Buddhism. But Zhenghu politely declines the position and sides with Wangdue. Zhenghu accepts command of a small army on the outskirts of Song territory, and the marshalship is given to a man fitting Wangdue's ideal: Song Wongkwai.

Wongkwai takes to his new office with zeal and proves himself a brilliant organizer. He uses Lin'er's conscription laws to raise fresh troops and institutes a radical new training program, beginning the transformation of Song's peasant militia into a professional army. 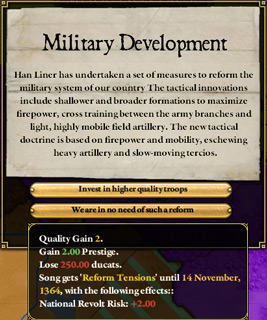 Throughout the winter and spring of 1362, Yue and Dahan engage in a few tactical skirmishes, little more than border raids in reality. Both kingdoms keep their main armies in their own territories, and a tense stalemate develops. Both seem to be waiting for the other to make the first move.

But Dahan has an advantage that Yue does not: allies. In June, Consort Li takes advantage of military access treaties signed during the rebellion and moves her armies through Song territory. 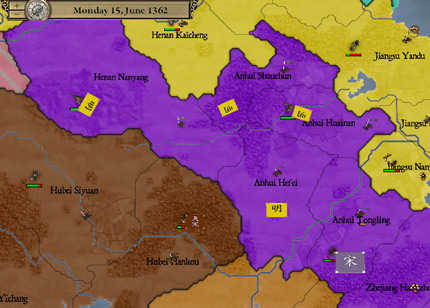 Lin'er is absolutely outraged. He terminates Ming's military access and demands their troops turn back. Consort Li refuses. "Even without a treaty," she writes, "our kingdoms remain allies, and as such I retain the right of free passage. With my kingdom at war, any attempt on Song's part to terminate this alliance would be treated by the Great Ming as a hostile act and responded to appropriately."

Lin'er backs down, but proclaims that the feeding or housing of any Ming soldier by a Song subject is illegal, punishable by imprisonment. Ming troops continue south, but they suffer heavy attrition and arrive in Dahan starved and weak. Zhou remains unable to move any men to the battlefields, although Lin'er suspects its unscrupulous merchant-king has little desire to do so.

Undeterred by the situation on the ground, Consort Li orders her ill-prepared troops across the Yue border in October. She forces the Ming soldiers into suicidal assaults on her dug-in, well-fed and more numerous enemy, and the results are predictable. But despite these minor Yue victories, trouble looms as the main Dahan army begins to march south. Lin'er rushes to the White Lotus Army, already camped on the border, and tells Wangdue, "If the Yue fail to hold, expect my next report to come from a battlefield." 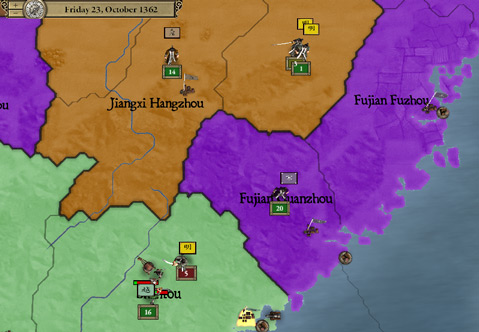 Lin'er's fears prove unfounded. The Yue hold their lands and force Dahan to retreat. Dahan's king, Zhu Zhengde, foolishly orders a second offensive in March of 1363: mere months after his first effort failed, and this time against the Yue capital. The results are nothing short of spectacular. Yue repulses the Dahan force, then chases and outflanks the fleeing army. Trapped between the Yue soldiers and the Pearl River, the Dahan are utterly destroyed, with many men and horses drowning as they're forced back into the water. Yue quickly moves its entire army into their enemy's now-undefended lands. 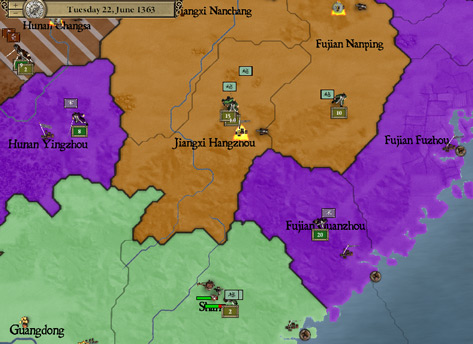 But Consort Li hides an ace in her sleeve. No belligerent in the Red Turban Rebellion had a single ship under their command in 1356, and all of the kingdoms which emerged built few, thinking control of the seas would serve no purpose. All of the kingdoms except, it seems, for one. Although a small Ming detachment moves to protect Dahan, it proves to be a decoy. In September, Consort Li's grand fleet sets sail, and her main field army lands on the shores of the defenseless Guangzhou. 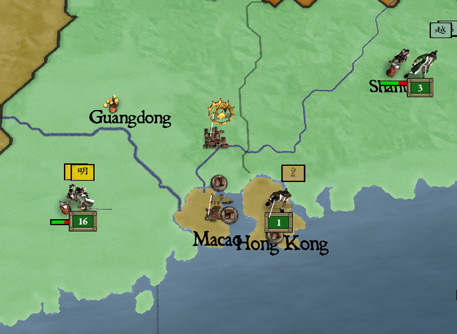 Lin'er, having camped on the border with his army for the past year, receives the news within days. "Very well, then," he says to the messenger. He doesn't need to pause and think before continuing. His mind is calm and lucid. As it should be. Finding paper and ink in his tent, he pens an offer of alliance and hands it to the Yue runner. "Bring that to your king. Tell him that if the Four Fiends themselves were to descend on his kingdom, I would fight by his side." Yue's response is swift. 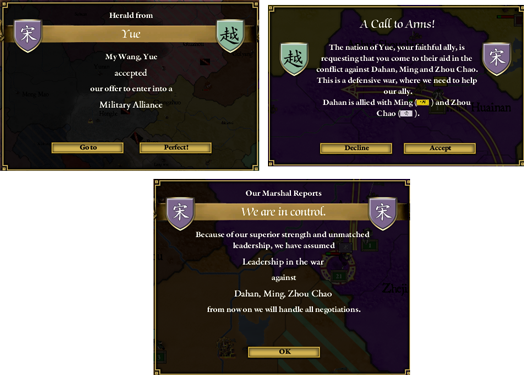 My Loyal Friends and Comrades,

For swift action, we need swift speech. Therefore my letter will be short.

War is upon us, gentlemen. We did not ask for it, we did not desire it, but it is here. An evil woman sits upon the Ming throne: a throne that deserves a more noble occupant than she. That woman seeks to conquer All Under Heaven and subjugate it to her will, whether Heaven would permit it or not. Her rule is illegitimate. Her schemes and ambitions threaten all of the Middle Kingdom.

We seek not conquest or subjugation, but the status quo. The Middle Path. Our aim is right, our cause just, our will unwavering. If the House of Zhu seeks to set China ablaze, so be it. It is for us to extinguish their flames.

The Mandate of Heaven permits only one true ruler of China. The will of Heaven is mysterious and inscrutable, but one fact is clear: that ruler is not this woman. She seeks to crush the Han people under her heel, not to bring them together in harmony.

Perhaps China shall be united within our lifetimes. Perhaps not. But when it is, as it will be in time, its steward must be a benevolent soul, a righteous leader, a true Son of Heaven. It is our holy duty to preserve China for his sake.

Fight well, gentlemen. Accept any surrender, harm no civilian, and above all else, embody the ideals of our glorious ancestors. Consider this your official order: march toward victory.

On October 1st, Wongkwai leads his forces toward Nanjing. Zhenghu proceeds into Dahan. Lin'er moves to liberate the Yue capital city of Guangzhou. And so it begins. 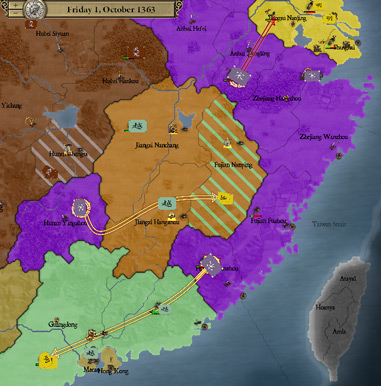