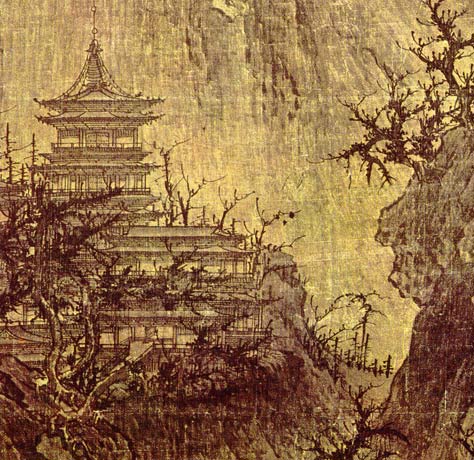 Despite the fanatical manner in which Wongkwai conducts his campaign, his strategy has clear military objectives. By scorching the Song countryside and moving into Ming territory, he gives the Ming armies only two realistic avenues of attack. Rather than fruitlessly chasing his enemy around, he forces them to come to him and fight on his terms. 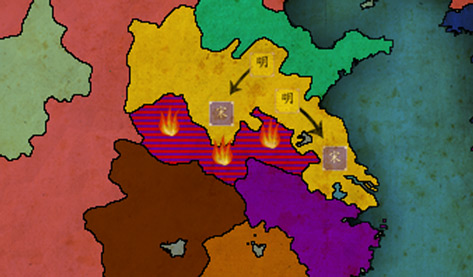 His armies hold against the Ming and subsequently rout them. By March, all the Ming can do is filter small handfuls of men into the burnt Song provinces, a pitiful attempt to lure Wongkwai away from their cities. With the White Lotus Army a month away, Wongkwai ignores the incursions and concentrates on his sieges. 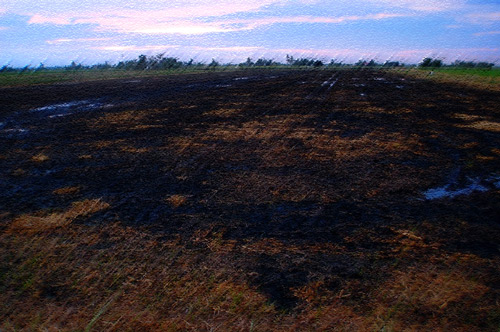 If the fighting in Yue had damaged Lin'er's spirits, marching through northern Anhui almost breaks them.

Another day like the last. Each one I spend in these lands feels like another weight being placed on my chest. When we freed this area from the Yuan, the fields were rich, and the people welcomed us as heroes. Now, for miles all around, all I see is ash. When we pass through villages and towns, all the residents hide in their homes and refuse to speak to us. They seem scared. I don't understand why. 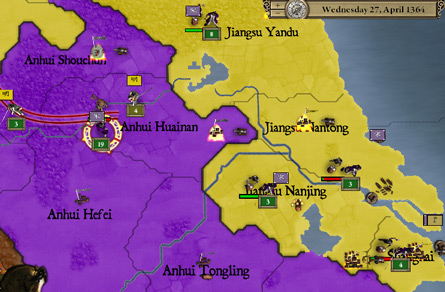 We stumbled upon a small group of Ming recently. The battle is not worth recounting. They'd apparently mutinied against their commanding officer days earlier and were simply trying to flee the area. Starvation and disease had beaten them before we even arrived. Those captured, when questioned, had the audacity to suggest we scorched the province ourselves. I left my officers alone with them for a few hours. Eventually, they confessed to their crimes.

I've dispatched several scouts to the north in search of Wongkwai's forces, but the general's location remains a mystery. I've decided to head east, to the coast, to see what can be done to bring this war to an end. It can't go on like this much longer.

As Lin'er settles in around Nanjing, news arrives from the south: Dahan's capital has fallen to the Yue. And just as the Ming general said they would, Yue annexed the entire kingdom. 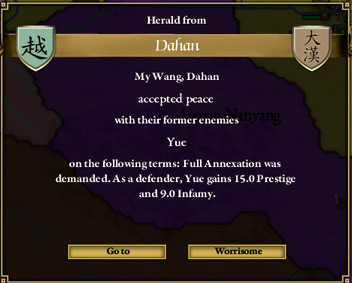 Not satisfied with even that, they went one step further and put the Zhu king to death. Apparently his son fled to the west and has been taken in by anti-Yuan rebels seeking a legitimate ruler.

Lin'er is outraged, but there isn't anything he can do. He doesn't know what he would do. He'd entered the war to save Yue from aggression, and they respond with aggression of their own? Zhenghu tries to calm him, tells him it's for the best that the lands are with an ally rather than an enemy.

"Allies? Enemies?" Lin'er can't abide it. "We should all be allies. A united China against the outside world."

"Sir... it isn't that simple. It was like this during the Warring States, the Three Kingdoms, the Ten Kingdoms... when China breaks down, one's kingdom becomes their new 'inside' until the rest are conquered."

"It should be that simple! It's just a matter of convincing others to adjust their definitions."

"Maybe... but it would take many, many years. If it's possible at all."

Regardless, Lin'er pauses his siege on Nanjing and sends an envoy to the gates with terms: among them, Consort Li is to step down and allow the fledgling Ming bureaucracy to head up the regency. Li rejects every line of the proposed treaty out of hand. "News," she writes, "unlike your army, can breach my city's walls. You fight alone now, and if you want anything from me, you must take it by force."

Months and seasons pass without any change on the front. Tensions mount as the war drags on into 1365, and the Song people grow more and more exhausted from the heavy taxation and lack of progress. Their view of the war shifts from being a necessary defense against the threat of Zhu hegemony to a wasteful attempt by an unready king to institute a new empire. But by June, "rumors" spread that the Song army torched northern Anhui themselves, and the simmering discontent explodes into open revolt. 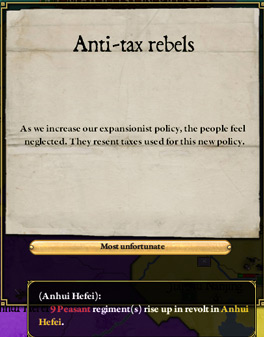 Lin'er leaves a force to maintain the siege of Nanjing and leads the rest of the White Lotus Army to put down the uprising. The rebels lack effective leadership and fight with little forethought or organization, while years of battle and training have made the White Lotus a hardened, professional army. Victory seems like a foregone conclusion, and Lin'er begins planning a future assault on Nanjing before the rebels in Anhui are even finished off. Meanwhile, word comes that the Song have finally gained ground in the Ming territories. It's a relatively minor objective, merely the lands around an insignificant fishing village called Shanghai. Regardless, after a year of deadlock, the news raises their spirits. 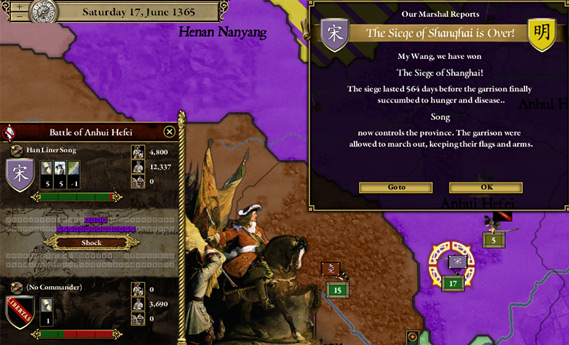 But on June 24th, disaster strikes. The White Lotus, seventeen thousand men strong, rout the peasant militia and move to crush them for good. The panicked, fleeing rebels loose arrows into the Song cavalry charge with no hope of holding off their destruction. But one of the stray projectiles hits Lin'er in the thigh. He brushes off the pain but within seconds begins to feel dizzy and lightheaded. His horse slows to a trot. Lin'er tumbles to the ground.

"Sir!" Soldiers dismount and run to their king while others continue the fight. "Sir! Are you—" Blood gushes from the wound, pouring out in spurts and soaking into the earth. The arrow sliced his artery wide open. A soldier tears a strip off his tunic and attempts to tie the leg off.

In under a minute, Han Lin'er, the founder of the Song Kingdom and hero of the Red Turban Rebellion, is dead. 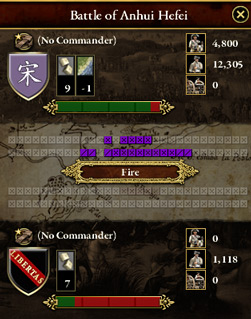 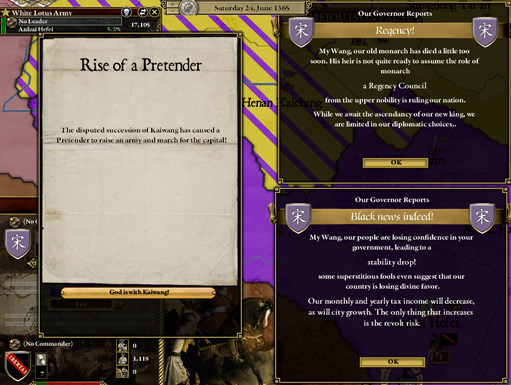 Chancellor Wangdue strides down the hallway of the capitol, eyes straight ahead, face calm and relaxed. Every room he walks by, he can sense the bureaucrats inside watching him, trying to judge whether they should panic and flee the kingdom. Really, they probably should. His mind races like a warhorse thinking about all the things that could go wrong. But it's important to maintain a cool facade to keep the wheels of government at their desks.

Four years after peace with the Yuan legitimized the Song Kingdom, its monarch is gone, leaving behind a seven year-old boy as the presumptive next in line. The war with the Ming shows no signs of ending. Practically the entire kingdom remains contested ground. Considering Lin'er died in battle, and to rebels no less, rival claimants to the throne have risen up, demanding "a capable ruler now, not an untested one in ten years' time." Naturally, they argue that "capable ruler" would be them. Meanwhile, a new kingdom has risen in the west under Zhu Zhengde's son, and Tianwan has finally put down its own rebellions and may strike while Song is weak. For the kingdom to survive, it must be guided by a firm hand.

Wangdue pushes open the doors to the conference room. Three men sit at the table; they break off their conversation when he enters the room. Marshal Wongkwai, who was none too pleased to be recalled from the battlefield, leans back in his chair with a stupid grin on his face. Next to him sits Zhao Wangyi, Prime Minister of the Department of State Affairs and highest-ranking bureaucrat in the kingdom. And at the end of the table is...

"I don't recall summoning you."

Jibi Zhenghu shrugs his shoulders. "I'm Lin'er's..." He winces. "I mean, I was Lin'er's closest confidant. I have a right to be here. And I don't recall you being king."

Wangdue ignores the slight and sits down at the head of the table. "Very well. There's a lot to do. So let's keep this short so we can get back to our jobs.

"First order of business. The throne. Since the queen dowager has neither the ability nor the desire to rule until Kaiwang comes of age, we're left with two options. Either we rule in his stead, or we back a new king and delegitimize the boy. Personally, I'm in favor of the former, but either option is realistic. Thoughts?"

Unsurprisingly, Zhenghu is the first to speak up. "A new king is out of the question. Han Lin'er forged this kingdom, and the throne is Kaiwang's by blood."

"Be that as it may," Prime Minister Wangyi says, "it will have been for nothing if it collapses without a competent ruler. I have no problem backing the child if that's what we can all agree on, but it would be better from a practical perspective to install a new king. Anyway, Lin'er's entire claim was based on—in my opinion, fabricated—links to the old Song Dynasty. We merely have to announce the links were contrived, then there's no issue of usurpation and we can choose a king based on merit."

"Oh, sure," Zhenghu fires back, "the Will of Heaven doesn't matter. Why don't you just have your ministers draw up an official examination so we can pluck our kings from the masses like a bunch of barbaria—"

"Zhenghu, stop that." Wangdue frowns across the table. "If you can't handle a conversation dispassionately, then leave. Notwithstanding, I agree. Our electing a king could set a very dangerous precedent. Wongkwai, your take?"

Wangdue manages to hammer out the basic structure of their regency council in under thirty minutes. None of the other three men are particularly keen on ruling the kingdom, so they're more than happy to vest the chancellor with most of the powers of a king. Wongkwai and Wangyi prefer to stick to their own specialties. Zhenghu's only concern is that Song follows the path Lin'er intended—or, at least, the path Zhenghu imagines Lin'er would have intended. Wangdue adjourns the meeting and lets them get back to their business.

"Except you, Wongkwai. You stay here."

The general turns to face Wangdue. He sticks out his jaw with pride, as if he already expects what's coming.

"I heard the 'rumors' about what you did in Anhui. Are you going to lie, or tell the truth?"

Wongkwai pauses to think it over before replying. "I did what needed to be done."

"So what if I did! The king commands the army, not you!" He grins and waves his hand nonchalantly. "I didn't need your authorization, and I sent you that letter as a courtesy. Don't think that just because Lin'er's dead you can all of a sudden tell me what to do."

Wangdue glares right through him. "No, I can tell you what to do. Whether a king sits on the throne or not, I control the Secretariat. I can have you killed with the stroke of a brush."

The general's face blanches as he considers this.

"Honestly," the monk continues, "I don't care that you torched the provinces. It may well have been appropriate given the circumstances. But if you try to conceal such a thing from me again, it will be the last time you do it."

Two months go by, and still the Song armies make no progress. Nanjing's defenses are as close to falling as they were a year and a half ago. Wangdue decides it's time to end the war, and sends a message to Li to that effect. He offers a temporary cease-fire and politely requests she come to Hangzhou to work out terms for a Ming surrender.

"Your king is dead," she replies, "and your kingdom is nearly as weakened as mine. Why would I ever agree to anything less than the status quo?"

He writes back, "I offer you a chance to negotiate while your defeat remains minor, because I would prefer not to continue the war. But I am not Lin'er. I have no compunction against putting your entire realm to the sword if you force me to do so."

A few days later, word comes from Nanjing that Queen Mother Li and her entourage are on their way to Hangzhou.