The officers of the White Lotus Army crowd around a hastily drawn map. Their voices rise and fall like the tides. They explode in debate, argue and rant about this or that idea, then settle into uneasy consensus. Han Lin'er sits in the back of the room, silent. His gang of peasant leaders have been honed into martial men, and he trusts them to draw up their plans without him. Lin'er fears his emotions could get in the way. The meeting with Yuanzhang still has him fuming. He spends his energy trying to empty his mind. 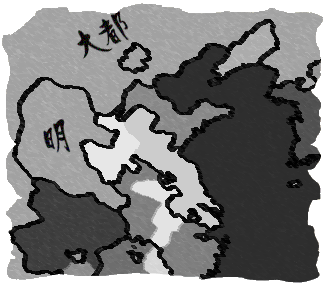 The officers decide to commit as few men as possible to the siege of Dadu and concentrate the main army on the coast. Neither the Yuan nor the Song have any navy, so independent merchants can supply the troops via the Yellow Sea, for the right price of course. The hostile winter will prevent any Yuan attack from the north. "The only threat," an officer warns Lin'er, "is an attack from the west. The northern winters are fierce, and we'll be too weak to survive any battle until our sieges are won."

"I think our good friend Zhu Yuanzhang will be more than happy to defend us." Lin'er smirks, a habit he's been picking up, but not one he's too fond of. "He doesn't want us expanding to the west. I have a feeling the fool will move his armies between us and the Yuan just to curb our growth." 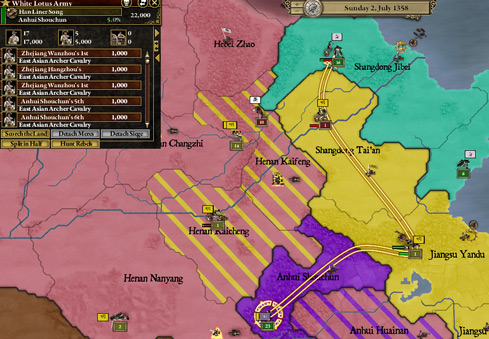 Lin'er's armies begin marching north in July and arrive in enemy territory in September. Just as that spy had promised, the Yuan interior is totally defenseless. Lin'er sends three thousand men to siege the Great Capital and takes the bulk of his army to secure the coast. He eventually finds the shadowy man; or, rather, the man finds him. Lin'er hires him as a spymaster to recruit and train more in his profession.

The merchant ships in the Yellow Sea are more than happy to deliver mail to the army, for a nominal fee. So for the first time since the beginning of the war, Lin'er receives news from the outside world. The Tibetan holy man, Wangdue Sengge, sends innumerable reports from the Song capital that could be summed up, "All is well." Jibi Zhenghu has defended the Yue rebels from minor Yuan incursions, and now assists the Song vassal He Zhen in expanding his territory. Tongling has been officially annexed, linking Song together as one realm. Lin'er's most treasured letter, however, comes from his wife. In delicate calligraphy, she tells him of their child, now a year old. A boy. His name is Kaiwang: "Triumphant prince." 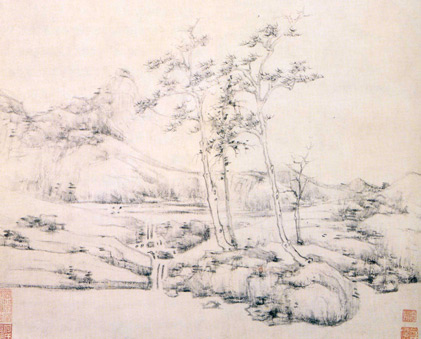 Short entry today. Buried another twenty dead. Every time I see my men, I know this was a mistake. The winter is more brutal than I had thought it would be. It will only get worse. The merchant ships bring supplies, but it is not enough. They cannot change the seasons.

The snow and temperature, not the Yuan, are our greatest foes. It is difficult to believe the horror the cold has wrought. Men go to sleep, shivering and miserable, and never wake. The rare days when temperatures rise above freezing, everything melts into mud and slime, then disease spreads throughout the corps and fells men as surely as arrows or spears. Last week, I watched an officer use his knife to hack off a man's festering leg in the hopes it would save his life. It did not. This morning, I helped carve blankets off of frozen corpses, that they might keep warm those who still survive. My hands trembled, my lips quivered, when it came time to do the work. The other men did their jobs quickly and without speaking. Seasoned veterans all.

Twenty two thousand men marched behind me to Dadu. Ten thousand are now dead. Their blood is on my hands as surely as if I had cut their throats myself. I see now where Yuanzhang is wrong. He treats his people as instruments, as tools. I do the same. I now understand the terrifying consequences. Yet I still do it, and that makes me even worse than him. I know I must continue the fight, I know this is for the good of the Han people. But every day, doing my duty grows more difficult.

I know that if we win this war, the people will declare me a hero. I cannot possibly imagine an indictment more damning.

But while Lin'er loses faith in the war's higher purpose, it proceeds just the same. 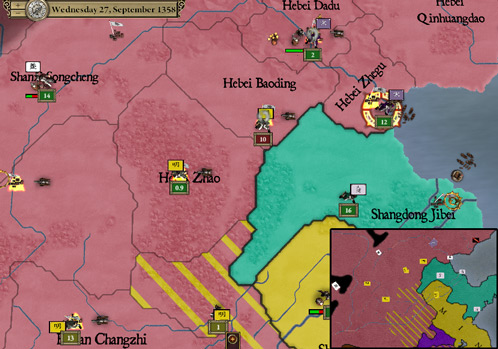 Yuanzhang does just as Lin'er predicted, moving troops north to cut off Song expansion. The Yuan armies march to defend their capital, and the weakened Ming are the only obstacle in their path. Reports reach Lin'er saying the Yuan outnumber them two to one. He doesn't know how to respond, or even whether he should.

But then, on November 15th, one message renews Han Lin'er's will to fight. The Yuan army is under the command of Toghun Temur: the Zhizheng Emperor himself. "At that moment," Lin'er later writes, "I realized my error. I'd begun to view the Ming as my enemy, when in reality they were but my competition. And no matter what they did to slight me, it was my duty to fight by their side." And so Lin'er gathers seven thousand men, the most he can muster without abandoning his sieges, and the White Lotus Army rides to join the Battle of Baoding. 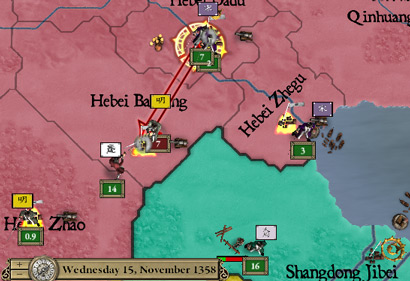 In Baoding, the Ming army is nearly destroyed. Their morale is almost crushed. But just as Yuan victory seems assured, Song cavalry pour over the hills and charge into the fray. 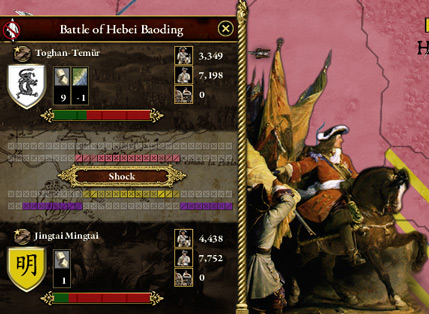 Zhizheng has no idea how to react as the White Lotus tear his armies apart. He pulls back to regroup, but the rebels will win the day. Fresh Song troops fill out the line and let the battered Ming pull back, and when they attack, their victory is decisive. 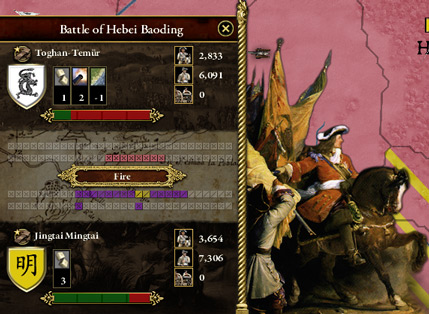 The combined Ming and Song forces pursue the retreating Yuan and wipe their army off the map. The Zhizheng Emperor manages to escape before he can be captured. After the battle, Lin'er rides to the Ming camp and is hailed as their savior. He accepts their praise as graciously as he can, then asks to be taken to Yuanzhang.

The Ming general looks at him in disbelief. "Sir, you haven't heard? Our lord quit the campaign."

"Our capital. Tending to affairs of state, I presume, but no one's really sure why he left..."

The next year goes by without a single battle. The Emperor's attack seems to have been a move of desperation, and without their capital, the Yuan are crippled. The Little Merchant of Zhou, as Lin'er calls him, declares war and invades Yuan days after Zhizheng's army is annihilated. Song partisans, acting without orders, land on Mongol-controlled Jeju and claim the Korean island in Lin'er's name. Provinces under Song occupation are put under state control and officially annexed. Dadu falls on April 6th. The White Lotus Army marches into the city to great fanfare; soldiers work together with city residents to burn the Yuan palaces to the ground.

Then, one week later, something happens that Han Lin'er thought impossible: Zhizheng accepts a negotiated peace from the Great Ming. 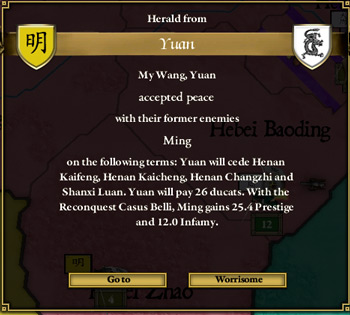 "We're moving south," Lin'er tells his aide when he hears the news. He doesn't speak with the same spirit he used to. The winter, the war... struggles have made him weary. "With Ming gone, we need to secure our border. Zhou occupies the area around Dadu, the Mongols won't be able to retake it. Send a diplomat to Nanjing. Get an audience with Yuanzhang and find out what the hell's going on."

The White Lotus Army besieges and occupies Nanyang by September, putting Song's western border on a line with Ming's. More than half of China proper lies in rebel hands. Scouts report the Yuan building a new army on the steppes, but it will take months for them to replenish their manpower reserves. Lin'er camps in Nanyang and plans his next move. And, just like he did a year ago, Zhu Yuanzhang arrives to pay him a visit.

Lin'er exits his tent to see a retainer helping Yuanzhang down from his horse. Although the Ming faction won a clear victory in the war, the man himself looks defeated. His robes hang loosely on his frame. He shuffles when he walks. His face is gaunt, his cheeks hollow, arms dangling by his side.

Lin'er frowns. Although it's only been a year, his opinion of the man has changed radically. Before, he thought Yuanzhang a strong but inscrutable leader, a person to be respected. But since Dadu, when he saw the man waste most of his army just to box Song in, that respect has vanished.

"What are you here for? I thought your war was over."

Yuanzhang nods. "It is. I'm merely responding to your diplomat."

"A letter would have sufficed."

"You sound unhappy to see me."

"You can relax. No more tricks, no more scheming."

"Why should I believe you?"

"Because..." Yuanzhang stops, takes a breath. He smiles wistfully. "Because, Lin'er. I'm dying."

The two men stand facing each other in silence.

"I always thought..." he continues, "I always thought there would be more than this. You know better than most how I plotted. I honestly believed it would be me: me who would unite the Middle Kingdom, me who be Emperor of China, me. But... well, I suppose it is not Heaven's will.

"Lin'er... I don't think any of us are long for this world. We four rebels aren't destined to unite China... not in our lifetimes. Our children, our grandchildren, they'll be the ones to carry on the fight. We can't..."

Lin'er puts a hand on Yuanzhang's shoulder. "Why don't we play a game of weiqi? For old times' sake."

The man flashes his devilish smirk. "I accept. But I must warn you, you don't stand a chance."

One month later, Zhu Yuanzhang, founder of the Kingdom of the Great Ming, is dead. But the House of Zhu is only beginning its rise to prominence.