Jibi Zhenghu sits far back in the lobby of the capitol building, arms crossed, brow crinkled, watching the Minister of Rites[1] fawn over Consort Li and her retinue. Zhenghu detests the woman. Chancellor Wangdue and Prime Minister Wangyi blind themselves to her vile nature. He and Wongkwai had argued for the war to go on until she was destroyed, but the spineless bureaucrats overruled the two military men. Wangyi even suggested Song should take nothing but a link to the Yangtze and work toward rapprochement. As if evil could be reckoned with.

Zhenghu's anger has been getting the better of him lately. The Supreme Buddha warned of this, warned that hatred does not cease by hatred. But Li is a special case. Li must be stopped, lest she pollute the Middle Kingdom with her filth. She should be thrown in front of the court, dressed in rags and bound by chains, not welcomed with open arms like a king.

The door to the council chamber swings open, and Wangdue steps out to greet her. Zhenghu curls up his lip. He's too far away to hear their conversation. Wangdue had ordered him to stay away from her. They bow to each other. Pathetic. The Chancellor humbles himself to a woman. Lin'er would have crushed her under his heel.

"When is Dad coming home?"

"Baby... come here, come here. Give your mother a hug. I told you, baby. Don't you remember? I told you. Some evil people hurt Lin'er very badly, so he can't come home."

Chancellor Wangdue and Queen Mother Li sit opposite each other at the center of the council table. Wangdue means for the seating arrangement to convey a sense of equality. At the ends of the table, members of the Song Secretariat and Ming entourage transcribe everything said between the two rulers. The scene is an odd one, to be sure: a Tibetan Buddhist monk dressed as a Confucian scholar, and a twenty-five-year-old former concubine clad in the masculine robes of a king, together planning to end a war.

"In addition to the area around the fishing village, we take the entire northern bank of the Yangtze and its alluvial islands. However, you may sail through the delta freely. We both promulgate decrees recognizing each other as legitimate monarchies until Heaven bestows a Mandate upon one of our kings. Do you find these terms acceptable?"

Li raises an eyebrow. "Is this a negotiation, or an imposition?"

"Although we won't be allies, I'd like to foster good feelings between our kingdoms. I'm willing to consider your opinion of the peace treaty."

"Well," she says, "the treaty is fair. The only thing I'd ask is free passage between my capital and the north."

Wangdue nods to the secretaries at the end of the table. They rifle through the papers in front of them, scribbling amendments and adjusting borders where necessary. When finished, they present the treaty and map to the two sovereigns for their seals. Li carefully scrutinizes every line before giving hers, but with everything in order, the peace is made official. Riders are dispatched to announce the end of the war and arrange the handing over of territory. 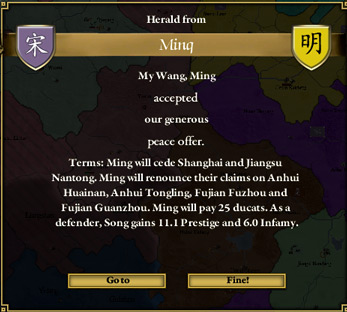 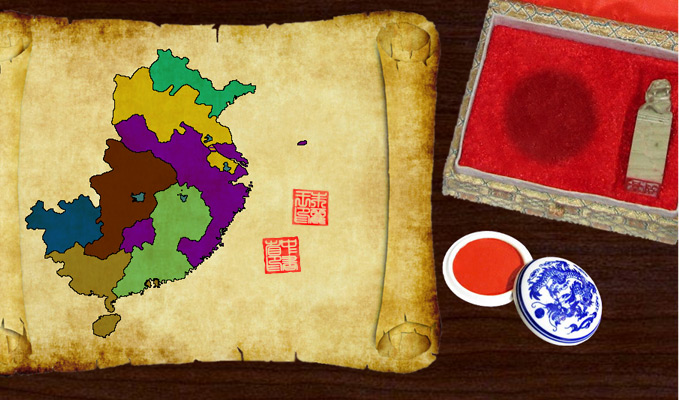 "Now that that's done with," Wangdue says, "I thought we might talk more informally. If you so desire."

They dismiss their people from the room so as to speak in private. Wangdue gets a jar of wine from a cabinet and pours them each a cup. Li doesn't touch hers. She puts her hands in her lap and sits motionless, eying the cup fearfully. Wangdue reaches across the table for it, takes a sip, and sets it back in front of her. Li eases up, and they drink together.

"You think I would sign a treaty with you, then moments later slip you venom?" Wangdue's tone is more playful than accusatory.

"Nothing against you in particular. A woman with power can't last very long if she's the trusting type."

"Your court is that volatile, then?"

Li smirks. "I see why they call you the Old Fox.[2] I'm more than happy to discuss foreign affairs, but if you want to debrief me on my domestic situation, you'll have to do better than that."

Wangdue bows his head in acknowledgment. "Duly noted. By the way..."

"That's one hell of a seal you have."

She chokes on her wine, trying to stifle a laugh. "I could say the same of yours."[3]

They talk for some time before Li departs for Nanjing. Neither really trusts their opposite number, and they make no official pacts. But their conversations put to rest many of the rumors that float on both sides of the border, and they find they can at least respect each other. They reach a cool understanding that neither really wants another war. Or, at least, they don't want one under the present status quo. Li's speech remains guarded throughout, but they both hint at vague "internal problems" they must "correct" in their respective kingdoms before worrying about external issues.

It isn't long before Wangdue's suspicions about the Ming court, however, are proven true. Frustrated by the failure of the war and determined to enthrone a man in place of the "mere girl" who rules over them, a faction of Ming imperialists attempt to assassinate Queen Li. Despite a sword slash from the base of her neck down her entire back, she manages to survive. The subsequent investigation implicates dozens of bureaucrats, all the way from the lowest ranks to her inner circle. In the months to follow, she violently purges over a third of her government.

Meanwhile, Chancellor Wangdue, Prime Minister Wangyi, and Marshal Wongkwai work with their respective departments to establish their visions of the Song Kingdom as reality. And although they draw up their plans in isolation, all of them mean to radically transform the society Han Lin'er had envisioned.