A clerk opens the door to Wangdue's office. The young man bows, sets the Chancellor's mail and morning tea on his desk, then wordlessly stands at attention.

Wangdue blows on the tea and takes a sip. He gestures at the stack of papers, making a queasy face. "The Prime Minister's?"

"Yes, Your Eminence. Two requests for more naval funding, a few about construction in Shanghai, and all the usual related paperwork."

He groans. Ever the bureaucrat, Wangyi. Descended from a long line of officials who served diligently without merit or distinction. It's in his blood. The man seems compelled always to be organizing something or other. And, with most important matters already being attended to, he focuses on the increasingly trivial.

Wangdue dismisses the clerk and tosses the papers on a pile with the rest. Still, he can't complain. It's been a few months since the expulsion of the Red Turbans, and the gradual increase in routine and drudgery means the kingdom is finally moving toward stability. And it isn't as if Wangyi's neverending proposals lack merit. The men just don't see eye to eye on certain matters.

Wangdue funnels every tael of precious metal he can into the army. Without an actual king, Song can't go on the offensive. But once Kaiwang is of age, the time can come to reunite the Middle Kingdom. Whoever has the best army will win. Simple as that. One kingdom could reconquer the empire in five years. These things rarely take long. Wangdue merely wants to ensure that when the fighting begins, Song emerges on the top of the heap.

Wangyi, however, argues for a "long view." Whether he expects a protracted, bloody struggle like the Three or the Ten Kingdoms, he hasn't said. The Prime Minister never talks about "why" or "how," maybe can't even understand them with his rigid adherence to procedure. His reasoning is a mystery to Wangdue. Wangyi wants a strong navy, he wants to develop Shanghai, he wants to "build rapport" with the other kingdoms.

A navy can be built after unification. Shanghai ceases to matter after unification. Rapport means little when all intra-Chinese diplomacy is part of a game, a series of deals meant to secure for the fittest king the Mandate of Heaven. Perhaps Wangyi doesn't even care who wins. He served the Yuan, after all. If Ming or Yue or Tianwan conquer everyone and consolidate China under one of their dynasties, all of Wangyi's "rapport" could easily secure him a place in the ruling administration...

Nevertheless, Wangyi has proven himself the ablest of Wangdue's servants. And if all the Prime Minister wants is to be a part of the dominant faction, his loyalty is not in question. That is, provided Song can assert its dominance.

1366 passes without any major incidents. Chancellor Wangdue does actually end up implementing some of the bureaucrat's suggestions. He issues a royal edict laying permanent claim to the worthless fishing town Wangyi so values, a move no foreign diplomats even care to dispute. 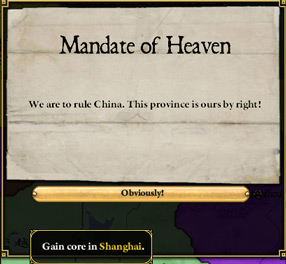 The Korean island of Jeju, seized by independent Song partisans during the anti-Yuan rebellion, is quickly becoming more trouble than it's worth. Peasants on the island are a constant nuisance, and Japanese pirates even use it as an excuse to move their raids south. Wangyi is allowed to build his navy to defend the rock, although Wangdue refuses to fund more than a small transport fleet.

At the end of the year, Tianwan calls Song into a second war against the Yuan. 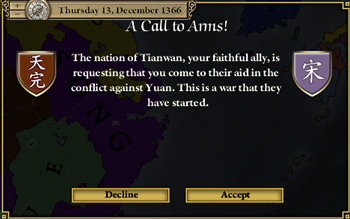 Marshal Wongkwai, eager to test his highly-disciplined new army on the fields on battle, races to the Mongol north. To his dismay, he finds it almost totally subjugated by Qi and the Thais.

Regardless, Wongkwai quixotically marches across Mongolia, searching for an opposing army that does not exist. He makes it to the border of the Jurchen lands by October and discovers the same freezing horrors that faced Lin'er outside Dadu. But winter is not so kind to this leader of men, and he dies unceremoniously, frozen curled up in a ball inside his tent. The marshal is given a state funeral and, for a time, largely forgotten.[1] The "war" eventually ends in an unofficial white peace, since Song never managed to fight a battle. 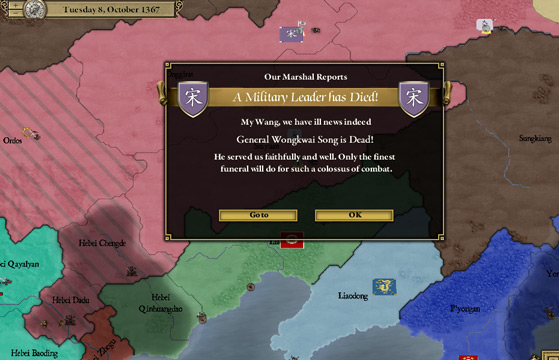 Around the same time, Han Kaiwang's mother takes ill and passes away, making the young prince a ward of the court. At first, Wangdue and Wangyi try to take the boy's education into their own hands, that they may fashion him in their image. The boy, however, proves totally ineducable. "As dense as a sack of stones," Wangdue bitterly writes of the heir, "and even stupider than that." They foist the task onto a committee of tutors, hoping the professionals may succeed where they failed.

However, Ming's prospects for an orderly succession of power become even dimmer than Song's. Rumors that Queen Li has taken a lover are confirmed when she announces that she is with child. Some months later, she gives birth to her second son and names him "as full a Zhu as his brother," arguing that the royal bloodline traces up through her and Yuanzhang's lineages equally. After surviving Li's purges in 1365, none of her courtiers dare raise an objection.

As Qi, Zhou, and Ayutthaya partition up the Mongol lands, wokou pirates wreck much of the Song coastline. Repairing the damage and building fortifications takes years and drains the Song treasury, while the destruction of rice crops drives up the price of food around the kingdom. 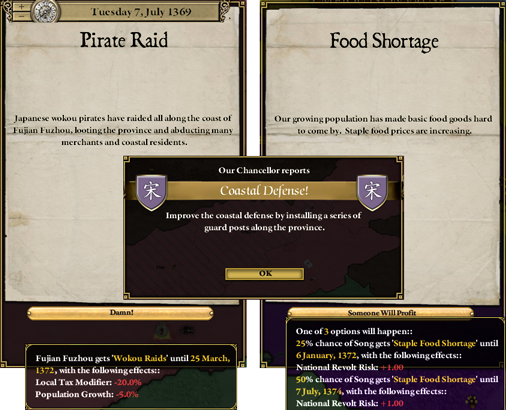 Wangdue begrudgingly signs off on the construction of military installations near Shanghai. Wangyi orders the Ministry of Works to build several forts and a series of piers and wharves along the banks of the Yangtze and down its tributary, the Huangpu River. He establishes Shanghai as the incipient Song navy's home port, and a number of enterprising merchants relocate to the area to serve the sailors' needs. The sleepy fishing village quickly develops into a small, though active, town.

Meanwhile, the Qi Kingdom continues to occupy Mongolia and gradually integrates more and more Yuan land into itself. But, in doing so, it spreads its forces dangerously thin. In September of 1370, Tianwan decides to take advantage of this weakness and declare war. Qi immediately recalls its armies from the steppes. They offer Toghan Temur, once respected and feared as the Zhizheng Emperor, a chance to flee to the north on one condition: he abandon and cede the Great Capital, Dadu. Left with no other option, he is forced to accept. 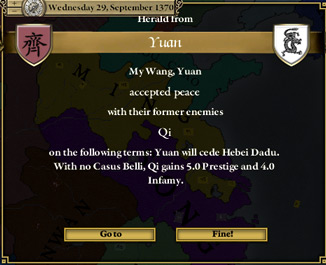 Qi, bereft of Chinese allies, calls the Koreans and the Lusong islanders to its defense. Tianwan plays up this "outside influence on Chinese affairs" to pull Ming and Song into the conflict on their side. The Zhu monarchs strike west, hoping to grab what territory they can, while the foreign navies ransack Song's coastline unimpeded. Lusong crushes Prime Minister Wangyi's much argued-for fleet and lands troops on Jeju. 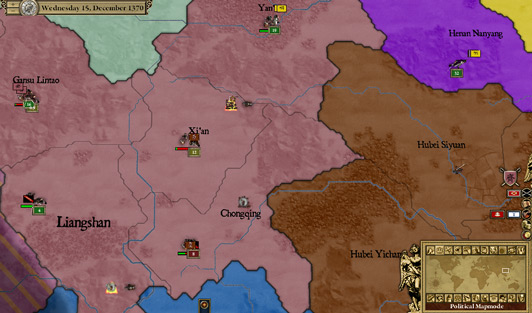 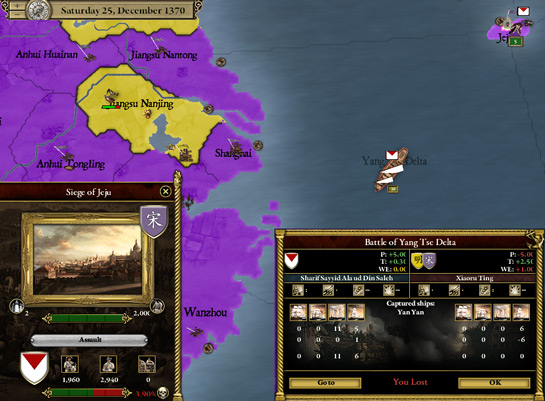 With little to gain from the war and no way to relieve the siege of the island, Wangdue gladly accepts Qi's offer of white peace in March. By April, the Koreans control the seas and even land an amphibious invasion of Nanjing. Rebels rise up across Ming, incensed by their queen's total commitment to offense despite the threat their lives and livelihoods. 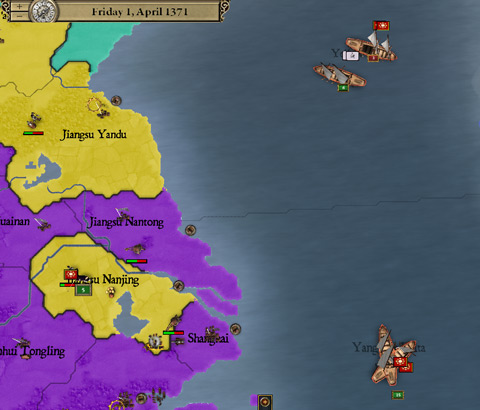 Queen Li doesn't care. Assured of victory, she holes up in the capital while her armies tear the Qi countryside apart. 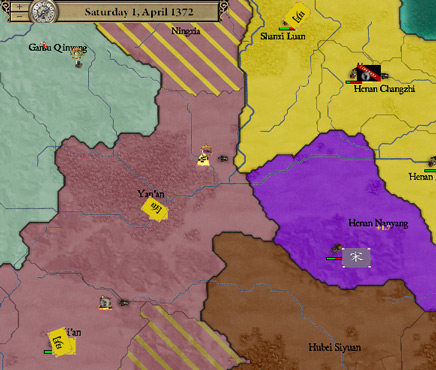 But her brother-in-law in Tianwan uses the Korean invasion as an excuse to unilaterally end the war. Although Li had installed him on the throne to support her interests, he now takes advantage of her victories on the battlefield to negotiate a peace that leaves Ming with nothing. 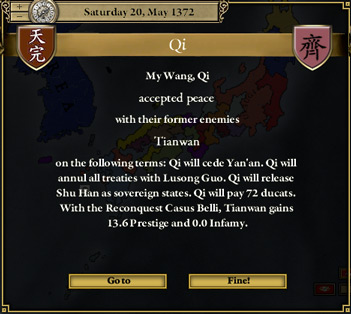 The warlike Zhu king, however, is not yet done. He sends diplomats to all the Chinese kingdoms, inviting their monarchs to his capital in Hankou. If rumors are to be believed, he plans to launch a third war: one that promises to utterly dwarf his previous two. And Han Kaiwang's fifteenth birthday quickly approaches. It remains to be seen whether the boy, still simple-minded and functionally illiterate, but with a growing impetuous streak, will be content to sit on the sidelines while Chancellor Wangdue manages the affairs of state.

A week after Tianwan's peace with Qi, Prime Minister Wangyi informs his employees that he will be traveling to Yue, to discuss with his opposite number there plans to coordinate development of the two kingdoms' infrastructures. He will travel alone, and thus be unreachable until his return. But after riding several li south of Hangzhou, Wangyi turns around and heads for his actual destination.

"Her Majesty has granted you an audience. Please, walk this way."

An attendant leads Wangyi down a long, broad hallway to an enormous door at the end. The servant opens it and averts his eyes from the room, apparently not permitted to even look inside. Everything is red, gold, and black. Lacquered pillars push the ceiling higher than the heavens. A yellow tablet hangs on the back wall proclaiming "Justice and Honor." A fresco of a dragon adorns the space beneath it, with four claws on each hand but room to make that number five.[2] Seven steps lead up a raised platform to a massive throne. And on that throne sits the Queen of the Great Ming, Zhu Li.

Wangyi bows, deep enough to show respect for her authority as a sovereign, but not so low as to suggest subservience. "Your Majesty's palace is a marvel compared to Hangzhou's humble government offices. It truly inspires awe from the moment one sees it in the distance, and leaves one breathless once one steps inside."

Li rests her cheek on her knuckles and taps an impatient finger to her temple. "Yes, well, that's what I had it designed for. Did Wangdue send you here to discuss something of import, or just to flatter my architects?"

"Then on whose authority do you come, bureaucrat?"

This catches the queen's attention. She sits up in her throne and motions for him to proceed.

"If it pleases Your Majesty," he says, switching from court speech to the Wu dialect, "I find it easier to express myself in this fashion."

"And it is my earnest desire to see that neighborly bond strengthened in the near future. You see, I come before Your Majesty with a proposal..."