Mere hours after Lin'er's arrival in Hangzhou, Wangdue rushes to his side. The monk is furious about Lin'er's peace deal with the Yuan. He calls it a waste of paper, waste of ink. "Establishing Xia," he says, "was never part of the plan. In spite of your Buddhism—rather, our Buddhism—we need to contain the Zhus' expansion westward. Not liberate dirt-farmers on the outskirts of China."

Lin'er shrugs him off. But the man still gives him pause. He can't deny that Consort Li represents a very real threat to Song's existence. Wangdue makes the next move abundantly clear: either Lin'er must "forge more permanent ties" with Yue, or he must conquer them and annex their lands. The latter is totally out of the question. The former... the former is still a difficult choice to make, because it affects not him, but his son.

Han Kaiwang sits in his mother's lap, wrapping his arms around her for support. She runs her hand through the boy's hair and smiles at her husband. When Lin'er had first approached the child, he hid behind his mother's legs and had to be coaxed out just to look at him. But like any child, Kaiwang hungers for stories, and Lin'er is more than happy to tell them.

"...and they were good people, but the emperor was very, very mean to them. So I told the emperor he had to leave them alone."

"Wow, Dad. What did the emperor say?"

Lin'er chuckles. "Well, he was mad. But he had to do what I said, because I was a lot stronger than him. So now the people in Xia have their own king who cares about them, and they're very happy, and the emperor can't be mean to them anymore."

Kaiwang scrunches up his forehead. "So... if I'm strong, that means I can tell everybody what to do? And no one can stop me?"

"Well, it's more important to be nice and let everyone do what makes them happy. If you're mean, everyone will get together and make you stop."

"But what if I'm stronger than all of them?"

Lin'er opens his mouth to reply, but a knock on the door cuts him off. One of his attendants enters. "I'm sorry, Sir. Wangdue Sengge requests your presence at the capitol immediately."

"Tell him I'll be a minute." The attendant bows in acknowledgment and backs out of the room. After the door closes, Lin'er says, "Ok, Dad has to go work now. Do you want to give me a hug?"

Kaiwang gasps and shrinks away. He clings to his mother and presses his face into her stomach. "It's ok, baby," she says, petting the boy gently, "it's ok. You just met your dad. You need to get to know each other first, right?" The boy curls up tighter against his mother, half-nodding, half-quivering.

Lin'er reaches out to touch Kaiwang, but his wife takes his hand and gives it a gentle squeeze. "Give him time," she whispers.

"Very well," he says, dejected. She's right, of course. But Lin'er can't stomach the idea that his own son fears him like a stranger. "We have to talk later." He gestures meaningfully at Kaiwang. "In private." He'd made his decision on the Yue question. He had Wangdue arrange the child's betrothal to the Yue king's eldest daughter. Before even meeting his son, he'd chosen his future wife.

Lin'er finds the monk sitting at a table with Jibi Zhenghu. The young man's face lights up when Lin'er enters the room. "Sir!" Discarding all sense of propriety, Zhenghu leaps out of his seat and embraces his king. "Sir, it's a relief to see you."

Lin'er chuckles and musses the young officer's hair. "I heard of your exploits in the south. Very well done. You have a few new scars, too. Was the fighting hard?"

"We fought bravely. But nothing compared to your campaign for Dadu, Sir."

Wangdue clears his throat. "Not to interrupt," he says, scowling, "but there are more important things to discuss." He slides a sheet of paper across the table. 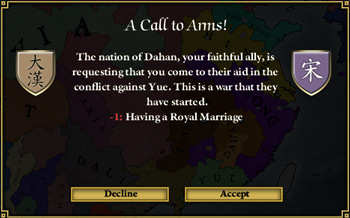 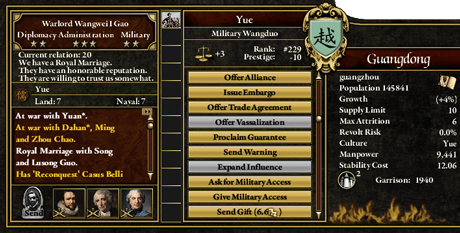 Lin'er's eyes widen. He sits down opposite the monk, never taking his gaze off the chit. "Wh... what is th—"

"What does it look like? Consort Li goaded Dahan into declaring war. She joined the Ming up under the pretense of supporting her ally, dragged Zhou into the fight, and now expects us to join in as well."

"This bears the seal of Dahan, not Ming."

"As if there's a difference. She carries Zhu Zhengde in her pocket."

Lin'er tosses the paper back. He shrugs. "Naturally, we refuse. We must protect the Yue. Levy the troops and send out the declaration of war."

"That would be an incredibly stupid—"

Lin'er slams his fist on the table. "What right do you have to speak that way to me?" He leaps out of his seat, eyes aflame, blood rushing to his cheeks. He points a finger at the spindly monk. "I am your king! You will do as I say!"

Zhenghu looks back and forth between the two men, never having seen Lin'er in a rage. Wangdue simply lifts one of his eyebrows. He picks at a cuticle. "Very well. I'll send the declaration. Tianwan is still neutral, so we need them to join the war against us as quickly as possible, and—"

"—and I'll levy our twenty thousand men immediately, so they may die to the seventy thousand the Zhus will raise against us. It's imperative we lead the Song Kingdom to ruin, so that—"

"Silence! You would abandon the Yue! You're no man! You're a snake, without honor!"

"That's right." Wangdue drops his feigned nonchalance. "That's right! I have no honor! All I care about is the preservation of this kingdom, and if that means I must throw away my dignity, so be it! I won't let you and your idealistic fantasies destroy everything we've built!"

Lin'er glares at the holy man. "So you would forsake them."

"No. If Consort Li conquers Yue, she will crush us right after. But we need to rebuild our levies, assist from the sidelines, and keep Tianwan neutral. Joining the war right now is suicide." Wangdue collects his papers. He stands and walks toward the exit. "We'll discuss it after you've calmed down."

Lin'er doesn't say anything back. He can't still his mind. He tries to recall his teachings from the monastery, the serenity of meditation, his father's voice before the Yuan choked the life out of him... Han Shantong sacrificed his life for the White Lotus cause. He died for a greater good. But... he had his son to take up his mantle. Lin'er has no one, not yet.

He tries to see the situation with clear eyes. Maybe Wangdue is right. Maybe Lin'er does need to sacrifice his ideals, work behind the scenes to engineer a favorable outcome rather than charging into the fray to defend what is good and right.

Or maybe he isn't cut out to rule a kingdom. The waters are too murky, there is no black and white like there was versus the Yuan. But if he lowers himself to Consort Li's level, scheming and plotting for his own kingdom's benefit, there's no moral reason why the Song should rise above the Ming. If they're all the same, does it even matter who comes out on top?