The Zhizheng Emperor has reigned as Emperor of the Great Yuan for twenty-three years. That reign may soon come to an end.

The year is 1356, and the Yuan Empire is in chaos. The bloated military, necessary to maintain order across the vast empire, steals funding away from every other enterprise of state. Institutional discrimination places more and more wealth and power in the hands of Mongol officials and aristocrats. Dikes along the Grand Canal crumble in disrepair, allowing the Yellow River to pour over its banks unchecked. Thousands drown or starve each year, and thousands more die to the resultant plagues. But the Son of Heaven does nothing. Instead, he invests yet more power in bureaucrats and regional warlords, weakening his grasp on the throne.

Some years past, Han Shantong, a member of the White Lotus Buddhist sect, began an insurrection by proclaiming himself the descendent of the last emperor of the Song Dynasty. The Zhizheng Emperor dispatched an army under the Mongol official Toktoghan to quell the incipient rebellion. Yuan forces quickly arrested and executed Han Shantong. Toktoghan proved a masterful commander of men, defeating the White Lotus rebels at every turn. It seemed the revolution would swiftly meet its end.

But Zhizheng knew that coups led by such men deposed the emperors before him. Paranoid, he dismissed Toktoghan from his command and ordered him banished, just as victory over the insurgents seemed assured. The decree outraged the general's men, who deserted in incredible numbers. Despite Toktoghan's willingness to accept his fate, he was later found dead in his camp, the victim of Yuan assassins.

Rebellions operating under the pretense of the White Lotus Society rose up across the country. Calling themselves the Red Turban Army, they captured swaths of territory throughout the Middle Kingdom. The rebel front quickly splintered into cliques, ostensibly united against Zhizheng, but also focused on regional—and presumably total—dominance of the Middle Kingdom.

Those rebellions survive to this day, and the Great Yuan seems powerless to stop them. But it is only a matter of time until the armies arrive. 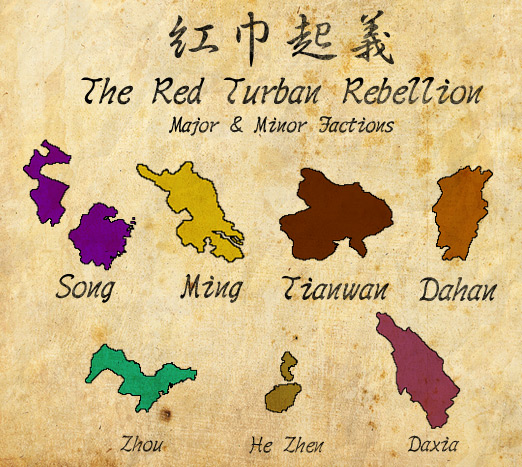 Song under Han Lin'er
The son of rebel leader Han Shantong, Lin'er was chosen by the White Lotus Society to become the next emperor. But due to the rise and subsequent fragmentation of the Red Turban movement, his ascension is now far from guaranteed. Still, he maintains a strong presence on the Yangtze Delta and enjoys some support from the Red Turban leaders. His followers claim him to be a descendent of the last Song emperor and the Maitreya Buddha incarnate. However, his professed Buddhism does not endear him to the Confucian literati.
Ming under Zhu Yuanzhang
As a teenager, Zhu Yuanzhang lost his entire family to plague after the Yellow River flooded their village. Destitute, he pledged himself to a Buddhist monastery that was later destroyed by a Yuan army. He joined the growing Red Turban Army in revolt, and his rise through the ranks was meteoric. In time, he discarded his Buddhism and transformed the war from a power struggle into a holy enterprise, fighting to uphold Confucian values and to restore the Han people to government. Yuanzhang now operates out of Nanjing, fully independent of Xu Shouhui, and thousands flock to join him each month.
Tianwan under Xu Shouhui
As founder and leader of the Red Turbans, Xu Shouhui seized much of southeast China and declared himself the Zhiping Emperor of Tianwan Dynasty. However, he quickly lost control of his generals, and now is one of many competing for power.
Dahan under Chen Youliang
An ambitious Red Turban general. Formerly subordinate to Xu Shouhui, Chen Youliang has proclaimed an empire of his own, the Great Han.

Khanates encroach on Yuan lands in the west, scornful of Zhizheng's claim to be Great Khan. A small rebel clique styled Daxia has come to power in the region near Tibet. He Zhen, a Mongol bureaucrat in the south, has pledged his support to Han Lin'er. The salt merchant Zhang Shicheng controls the mouth of the Yellow River and Shandong Peninsula, calling his realm Zhou Chao. Further north, Korea has established its independence and Jurchen warlords await their chance to pour into Yuan lands.

With the bulk of the Yuan Army battling khanates in the west, the Red Turbans consolidate their power and bide their time. But this fragile peace will not last. The stage is set for war to erupt in the Middle Kingdom. All that is needed is the spark.