The Road to War

As winter passes and spring begins to bloom, a sense of tranquility pervades the streets of Hangzhou. The people's spirits rise with every degree of temperature and day of peace. Soldiers, markedly more organized than even a year prior, filter in and out of the city, either on leave from the northern defenses in Anhui or returning to them. The downtown marketplaces regain their characteristic bustle. Old men sit around tables on street corners playing weiqi and sipping warm sorghum liquor. Mothers scold their children for misbehaving. "Why, when your father comes home from up north and hears what you did..."

The mood in the provincial courthouse, repurposed by Han Lin'er into his quasi-government's headquarters, is not so light. At the moment, the Zhizheng Emperor's armies are busy pacifying the Chagatai hordes in the far west. But the Yuan will move against the rebels soon enough. Lin'er knows he has precious few months in which to prepare for the inevitable; any day after the monsoon season, Zhizheng's forces could be on his doorstep. So Lin'er wastes no time getting to work. 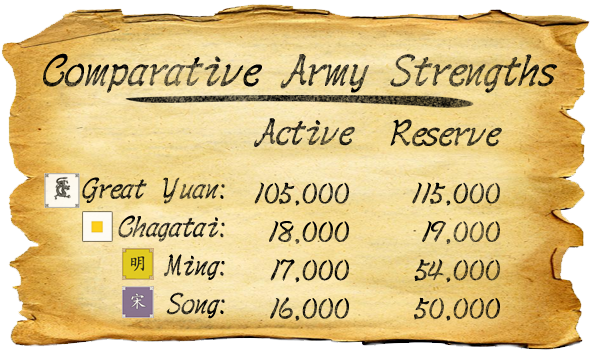 With the Red Turban factions exercising only de facto control over their territories, people are free to travel between the rebel provinces and Yuan proper as they please. For good or ill, this means information flows through all parts of China quite freely. Reports show the Yuan outnumber Lin'er and his ally, Zhu Yuanzhang of Ming, three to one. However, popular opposition to Mongol rule means the Red Turbans can tap relatively large manpower pools. Lin'er institutes a conscription policy to further bolster the Song reserve and funnels all his revenue into outfitting more troops. 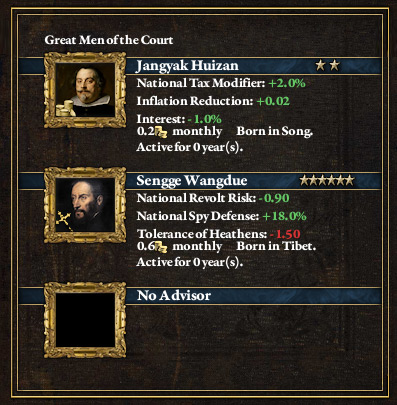 Most Mongol bureaucrats fled north when the rebellions began, but Lin'er manages to locate a Wu treasurer who is quickly put to work rebuilding the local tax collection system. Some days later, a Tibetan holy man by the name of Wangdue Sengge comes to the courthouse to offer his services. He says very little about himself or his beliefs, but his brilliance is clear. Han Lin'er invites him to stay, dismissing his other advisors' protests. They're suspicious of the man's motives, and the Confucians in the group decry admitting a Tibetan to the inner circle, but Lin'er is firm. He holds vague notions about spreading Mahayana Buddhism in stabler times, and sees Wangdue as the potential vehicle for his message.

Already counting Ming an ally, and with He Zhen a vassal under Song, Lin'er dispatches diplomats to the other provinces in revolt to unite them against the Yuan. Tianwan and Dahan accept, although they do so with great hubris; having both claimed the Mandate of Heaven, they send decrees "solemnly pledging to defend their loyal dukes from the Mongol barbarians." Daxia politely declines. Curiously, they believe their position on the outskirts of the empire is enough to protect them from reprisal. The diplomat to Zhou is refused an audience with Zhang Shicheng, an outrageous gesture by a salt merchant who styles himself a king. 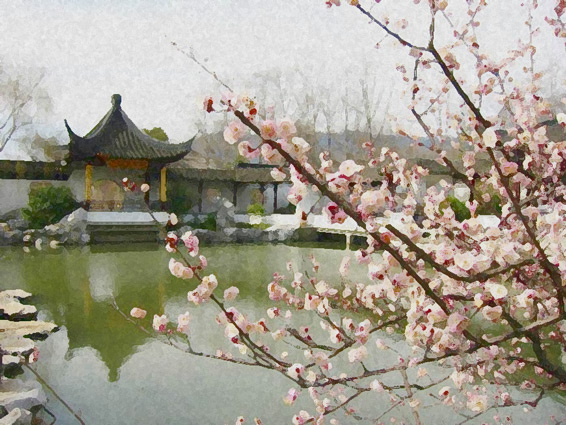 A meeting of the four factions' leaders is called in Nanjing. After the customary pleasantries, discussion quickly turns to strategy. It is agreed that war should be declared preemptively, while the Zhizheng Emperor remains bogged down in the west. Negotiations for a four-way alliance, however, fall through. Zhu Yuanzhang is open to the idea, but neither Dahan nor Tianwan back down on their claims to the Mandate of Heaven. Dahan's brash Chen Youliang draws the line in the sand, claiming Ming as his protectorate and threatening consequences should Tianwan meddle in "imperial" affairs. Yuanzhang remains silent, but Lin'er can't help but notice the man smirk. The conference is canceled before relations between the factions can be further spoiled.

Throughout much of the summer, rumors spread like plague. First that Chagatai cavalry are routing the Yuan armies, then that the khanate has been utterly defeated. Korean patriots have apparently risen up to reclaim the rest of the peninsula; news of their success or failure is equally mixed.

But one report filters in consistent as the seasons: Ming plans to go to war on its own, then demand the factions follow their command. Eventually it comes to be taken as a certainty in the court. "Never," Lin'er announces to his advisors. "I won't have it. I'd rather we fight alone than be forced to end the war prematurely by a sheet of paper. Send men to Nanjing, infiltrate their barracks, their court, whatever it takes. I want to know when Yuanzhang declares war before Yuanzhang does."

Then, on September 8, 1356, a Song rider brings word to Han Lin'er's court: it is done. Ming troops are on the march. 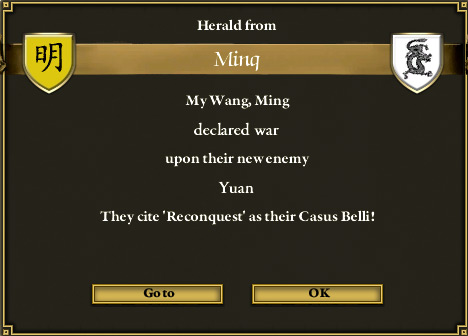 Knowing Yuanzhang's diplomats must have already set out to request the factions join "Ming's" war, Lin'er acts quickly. He announces his own war against the Zhizheng Emperor, calling Dahan and Tianwan into the conflict under his leadership. The Ming envoy arrives, sure enough, the very next day. He refuses to believe the "coincidence" until Lin'er shows him the written decree. The envoy is politely sent away, and since Song's declaration predated his arrival, the alliance with Ming remains valid. Dahan and Tianwan quickly send their replies. Tianwan whinges at length about Song's war leadership clause, but nevertheless accepts. Dahan's chit is decidedly briefer: "Although we are surprised to hear you refuse to follow the Great Han Emperor and his loyal duke Zhu Yuanzhang into battle, we wish you luck in your endeavor." Despite the tiresome diplomacy necessary to deal with these two nominal empires, military access is secured between the four factions and the Song Army goes on the warpath. 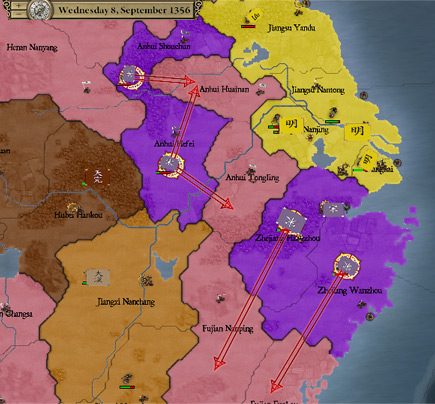 Lin'er calls his generals to the provincial courthouse before they depart for a brief strategy session. As they gather around the table, he considers "general" may stretch the imagination. The fighting to now has been sporadic, disorganized, messy. When choosing his leaders, Lin'er had little to gauge the men on save fighting ability. After all, his armies are mere militias, drawn from the farmers and fishermen who live in Song territory. And after dealing with courtly types for the past year, these men who gather around the table now appear as an association of brawlers.

"Securing the eastern half of Anhui Province," he begins, "is your top priority. Even if it means abandoning the north. Without it, we are cut and we will die." He pauses and again looks the men over. Most stare at him blankly, either uncomprehending or just itching to be on the battlefield. One younger man, however, glances away from Lin'er and cracks a smile.

"Those of you not going to Anhui will march south and occupy Fujian Province. Pacify a territory, then continue along the coast to the next. The First Army will remain in Fujian until November, then proceed north to the outskirts of Tianwan territory to meet the Yuan armies."

Lin'er searches for something inspirational, something motivating to say, the sort of words that raise men's spirits, yet he can't seem to find the...

"That is all." The commanders, shrugging and mumbling, stand and filter out of the room.

"Except you." Lin'er motions for the thoughtful one to come forward. Seeing him in better light, he appears not older than twenty. Fresh-faced and sharp, but clearly peasant stock just the same. "Tell me, earlier. What did I say that so amused you?"

"Dispense with that. 'Sir' is quite enough."

"It was just... Sir, when you spoke of being cut at Anhui, it reminded me of a proverb my weiqi[2] master taught me. 'Even a fool connects the peep.'"

Lin'er smiles, and the nervous young man's shoulders relax. "You play? That's good. It develops a sense of balance in the mind. What is your name, soldier?"

"Zhenghu, as a weiqi player, what do you think I meant by my statement? Viewing the map as a board, I mean."

"Well... we hold the north. The Yuan have no hope of saving their territory below without breaking through our line first. The only..." He trails off, not seeming unsure of what to say but whether to say it. Lin'er nods for him to continue. "You mean the Ming. They cut in one move and our northern group is dead."

Lin'er chuckles. "Continuing the metaphor to the end. Very well, then. You'll be my eyes and ears on the front. Link up with the First Army and report what you believe to be important; I feel I can trust your judgment."

The boy bows and sets off to rejoin his group. Lin'er sits back down at the head of the table. Weiqi is very much like war, he muses to himself, in that one must balance local tactics with global strategy. But in weiqi, you have only one opponent, and you know who he is. In war, it is not uncommon to see more players join a game in progress and begin placing stones at will.