From the Desk of Wuming Shi[1]

To: Zhang San, Ministry of War
Hey, Rites tells me the Ming are coming to discuss a peace deal. You going to have any free hands in your department? I mean with the armies standing down and all. Got a huge backlog because of these uprisings, hoping to clear my desk by next week.
―Li Si, Ministry of Justice

Re: Li Si
Sorry buddy, no can do. Marshal says the minute they get back over the border, he's reorganizing everything. So we're going to be busting our asses even harder than you guys.
―Zhang San

State of the World

Report authorized by the Department of State Affairs. Accurate as of September 8, 1365. All necessary changes will be communicated to you at your supervisor's discretion. In the event your supervisor is unavailable and immediate up-to-date documents are required, requests may be made through the Cartography Subgroup of the Ministry of Public Works. Please be advised requests typically take two to three weeks to process. 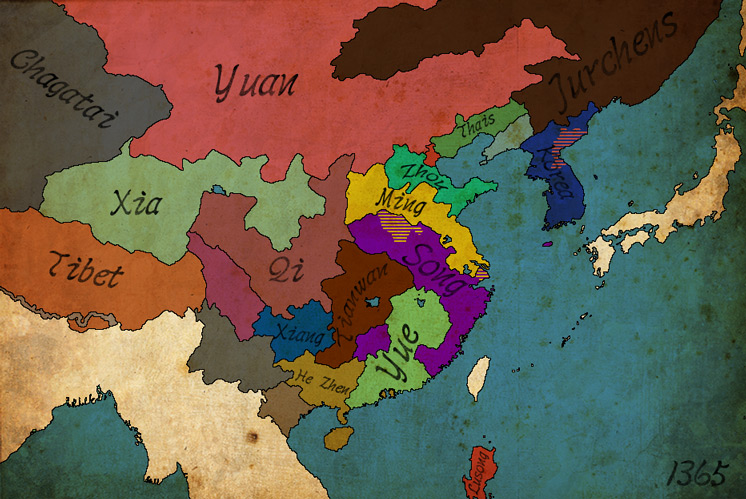 Song gains in the war against the Ming have been minimal up to this point. With a temporary cease-fire in effect pending the outcome of peace negotiations, it remains to be seen what territory will be changing hands. The Secretariat suggests that annexation of the area around the fishing village of Shanghai is likely; this region is mostly farmland, but would give our kingdom access to the Yangtze River. This could be a great boon to our economy until Works manages to repair our sections of the Grand Canal. We have claims on several other sections of Ming land, but without a convincing victory, we don't expect more than an additional province or two.

To the south, it is impossible to miss the impressive growth Yue has made. With the annexation of Dahan, they've become the largest economy and second-largest military power in the region. Their king has pledged his allegiance and support to Chancellor Wangdue in thanks for his assistance in the war.

In the west, two new kingdoms have emerged: Qi, under an independent rebel leader, and Xiang, led by the son of the deceased Zhu Zhengde of Dahan. This serves to further cripple the Yuan, and it seems their empire has faded into insignificance. The small kingdoms further to the west are of little importance to us. Meanwhile, Xia throws its weight around in the Chagatai lands, and Tibet musters its army for unknown purposes.

To the north, nearly everyone seems to be after a piece of the Yuan. The Koreans have reclaimed their peninsula. Jurchen hordes maraud across Mongol lands. And in a surprising development, the southern kingdoms of Ayutthaya and Lusong have snatched up the last bit of the Yuan's coastline. Rites is investigating whether they come to trade with or go to battle against our kingdom. The Jin rump state seems to be on its last legs and isn't expected to survive much longer.

Finally, we turn to news from more distant lands. It should be no surprise that the civil war in Japan continues unabated. With over twenty different factions and none holding a dominant position on the islands, not even the Jade Emperor's bureaucracy could attempt to map the situation. Naturally, we will notify the relevant department subgroups if the situation becomes more comprehensible. The southern part of the continent is similarly complicated. And if rumors are to be believed, a Muslim empire called Bengal is gaining traction in India. While we don't know exactly how large it is, reports suggest it may be the most powerful country in the world at this time.

"Work Hard: Your Kingdom Needs You!"
―Department of State Affairs

Finally got that dialect report we've been waiting on. Rites really dragged their feet. Guess they're still mad they don't get to head up the Ming delegation. 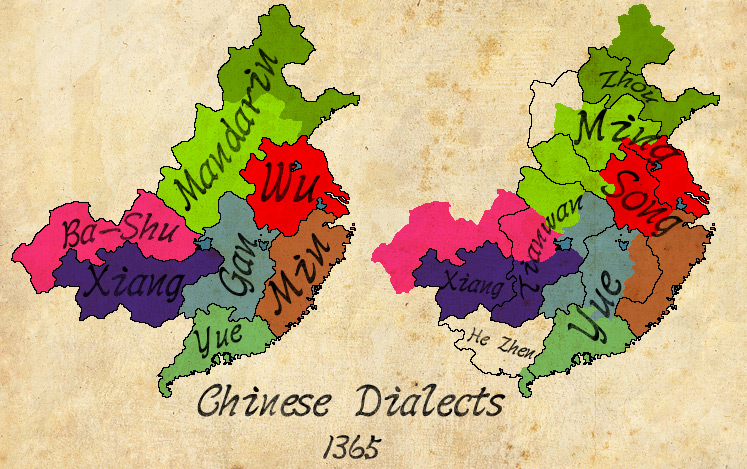 I had to listen to a long (long) explanation about how this "oversimplifies the true nature of communication to an almost criminally negligent degree" and that it was "rendered using clean lines and pretty colors for the benefit of the lukewarm intellects that populate the Secretariat." To say nothing of the incessant reminders of what is or is not in line with ritual propriety. Honestly I should get hazard pay for this.

Anyway, as you can see the picture's not that complicated. With the territory we have right now, our people are split about 50/50 between Min- and Wu-speakers. Ming and Yue are solidly Wu and Yue respectively. Tianwan is rather more motley, Zhou is pretty close to Beijing dialect, and He Zhen is made up of an uncountable variety of Thai languages.

But what the people speak doesn't matter much compared to what the officials speak. Any scholar-bureaucrat can communicate in court speech... to greater or lesser degree. Unfortunately, ten years of war did a number on the education pipeline, so a lot of our younger officials have a flimsy grasp at best. Since we draw most of our rank-and-file locally now, we've started conducting day-to-day business in the Min spoken in Hangzhou. Anyone who doesn't speak it can make himself understood in writing anyway.

The point I'm building to though is the Ming have done much the same with Nanjing Wu. Zhu Yuanzhang tried making a new court speech out of the Mandarin varieties brought into the city from the plains, but that plan kicked it when he did, and it seems more likely now they'll just assimilate.

The Wu thing is key for the summit. Li speaks it, all her confidants speak it, it's part job requirement part loyalty badge for them by now. We want to conduct all business in court speech but have some Wu-speakers to catch whatever the Ming side may mutter to each other. Discreetly.

It'll be harder for them to do the same to us. Ask around, if we don't have anyone in the Secretariat then borrow from Personnel or Justice (not Rites, please not Rites). There's gotta be at least someone on our side who can do this.

Memorandum
To: All State Affairs Employees
This is the third time this month we've needed to circulate this memorandum, but it never seems to catch on: Everyone, please stop circulating unnecessary memoranda. They waste paper, ink, and everyone's time. All three of these things cost money, you know.
―Ministry of Taxation