Wangdue shoots the boy an icy gaze. Kaiwang frowns and crosses his arms like a spoiled child. Nearly fifteen years old, and he still whines as if he were five. His coronation is only a month away. Wangdue and Wangyi can't postpone it any longer. The bureaucrats grow more restless and agitated every day that passes without the boy on the throne. They know he's an imbecile, of course. It's impossible for anyone who's heard the prince speak not to know. But, still, they find the idea of serving an idiot-king far more comfortable than no king at all.

"I'm sorry, Sir," Wangdue says, the appellation tasting like venom on his tongue, "but it's impossible. Tianwan has been very strict on the point that each kingdom may send only one represe—"

Wangdue sighs. He removes a document from his robe—he isn't sure what it says, but it doesn't really matter—and unrolls it in front of the boy. "Very well, Sir. Make sure to bring this, though."

"Why, it's a speech. It must be read at the summit, otherwise all is lost."

Kaiwang gapes at the sheet of paper in front of him. He blows air through his lips. "I don't wanna go to your stupid meeting anyway. You better do a good job!"

"Of course, Sir." The Chancellor's eyes narrow in contempt as the young prince storms off. "Of course."

The leaders of the various Chinese realms come together in Hankou at the end of June. They wait in the Tianwan king's council chambers for the man to arrive. The kings of Xiang and Qi are notably absent. Qi is no surprise: the idea they would travel to Tianwan a month after a war with them is ludicrous. Xiang's absence, however, has no logical explanation. Something to look into.

Wangdue chats idly with Queen Li and Gao Something—he can't quite remember the Yue warlord's given name. The recently-crowned king of Shu pokes his head into their group every now and then, as if he's trying to remind them he's still there. Zhang Shicheng, merchant-king of Zhou, sits back in the corner, occasionally muttering under his breath. Although his tactical brilliance cannot be doubted, something about him seems a bit... off. So they're content to leave him be.

Eventually the Tianwan king wanders into his council room, a distant look in his eye and some measure thinner than a man of his height ought to be. He opens his mouth to speak, but at first, his throat seems to creak from the effort. He coughs and begins his speech.

"I'm sure you're wondering why I've called you here... I'm not an eloquent man, so I may as well just tell you." He sounds tired. Defeated, in a way. "A monstrous enemy from the north threatens the Han people: the Jurchen hordes.

"No doubt you all remember last year, when they gobbled up the Jin. Indeed, I wrote it off as a feud between northern barbarians. But no: as we speak, they prepare to invade the Middle Kingdom.

"Their armies are vast: they can put more men on the field than any one of our kingdoms. Divided, they can crush us with ease. But if we unite, fight side by side as we did against the Yuan, they do not stand a chance."

The Tianwan king sits. "I open the floor to all discussion."

Wangdue immediately speaks up. "You just ended a war of conquest last month. How do we know this isn't a ploy for you to acquire more territory?"

"I second that," Li says. "What is your stake in our fighting the Jurchens? I see no hordes rampaging through my kingdom, and they are closer to me than to you."

"All the more reason," their host replies, "for you to be concerned."

"Bullshit," she says. "You mean to bleed us dry and then take what's left. I'll have no part in any war led by you." Wangdue's eyebrows climb up his forehead. The Zhu did stab her in the back with the recent peace... but there must be some other reason for such vitriol.

The Yue warlord speaks next. "I won't follow Tianwan either. I mean no disrespect to the Great Ming or Great Song when I say this, but I'd gladly be led by into battle by a monk or a woman before I take orders from you."

The king of Tianwan shows his palms and shrinks into his chair. "Friends, please... I mean no harm to any of your great kingdoms. My only interest is protecting China from invasion. If you will not have me as your leader, I step back without pride and will follow any of you who would take up the mantle."

"The natural choice," Li purrs, "is the mighty Song Kingdom."

It takes a mountain of effort for Wangdue not to leap from his seat. God damn it. Of course she knows Kaiwang is due to assume the throne: like an idiot, Wangdue announced it in a decree without waiting until after this summit. And, of course, she knows what a fool that boy is. The entire bureaucracy has spent years hunting down tutors who might be able to do him some good. Everyone in the Middle Kingdom has heard by now.

"That's acceptable to me," the Yue warlord adds. The salt merchant grunts his assent. The Shu king agrees as well, not that his opinion matters for much.

Wangdue scowls. He has no reason by which he can refuse. Saying no would break all his alliances at once and be an open invitation for everyone to invade the kingdom. But if the Tianwan king is willing to cede authority so readily, the threat must actually be real. And with Ming still rebuilding its army, there really is no one else to take the helm.

"Fine," he says. "But the war is to be conducted as I say. If you put me in charge, I hold supreme authority." 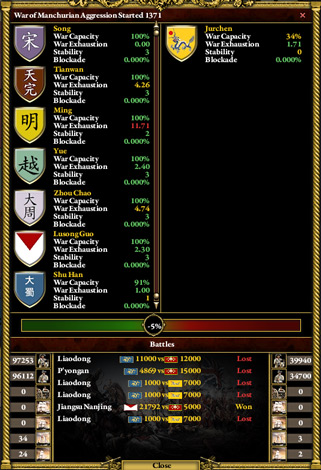 They spend the rest of the day and much of the evening poring over reports and drawing up plans. As it is, the Jurchens cannot penetrate China. Amusingly enough, the only barrier to their entry are the Thai possessions in the northeast. Soon after Ayutthaya scooped up their piece of the Yuan Empire, they showered Jurchen tribal leaders with fineries the barbarians had never before possessed, in a bid to prevent them from invading the colonies. And the corrupt chieftains seem reluctant to throw away such luxuries. Unless the Jurchens go to war with Ayutthaya, or the Thais let them pass through their lands, China is safe.

The Chinese leaders decide to take a defensive posture, at least at first. Access through the Thai holdings is to be secured, and troops are to be sent to the border. Perhaps this show of force will be enough; if not, they must be ready to act. Wangdue departs Hankou the next morning to deliver the news.

As Wangdue enters the gates of Hangzhou, a man strolls up beside him. "Your Eminence," the man whispers. His chief spy. Wangdue can never recognize him until he speaks—a testament to the spy's skill, and likely the reason he tends to remain silent in other company.

"Mm." Wangdue doesn't break stride or regard the man at all.

"Troubling developments. Seems Wangyi made an unannounced trip to Li's court. No word yet on what was discussed."

"Find out. And put him under surveillance. If he's planning something, I want to know what."

No answer. Wangdue looks to his side as unobtrusively as he can, but the man has vanished in the crowds already.

Upon entering the capitol, Wangdue immediately goes to Wangyi's office. The Chancellor, while no master of espionage, understands the game well enough. Treat a potential enemy as if he is your closest confidant. Only keep the secrets that truly matter.

Wangdue briefs him on the Hankou conference, and on the potential war. They agree that it would be best not to fight a single battle. If moving the armies to the Thai provinces fails to deter the Jurchens, they should retreat to Chinese land. Wangdue suggests they should fall back to the northern Ming border, let Zhou and the Thais bear the brunt of it. Wangyi agrees with him. But if it comes down to it, the Chancellor plans to keep them marching until they reach Song soil.

Before the armies begin their trek north, the Song Kingdom celebrates the inauguration of its second monarch. Wangdue leaves before the ceremony is finished. He can't stand to watch the vulgar business. The festivities could very well be a funeral. 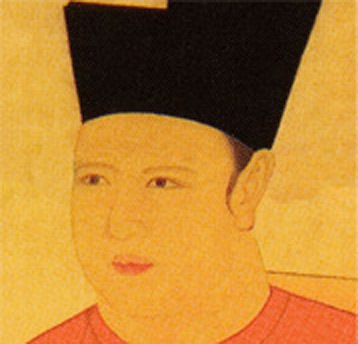 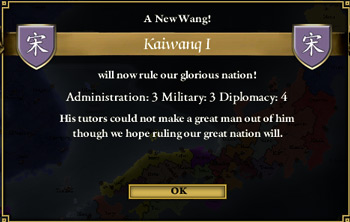 Chancellor Wangdue, Prime Minister Wangyi, and the newly-crowned King of the Great Song, Han Kaiwang, sit in the capitol building's dining hall. A servant brings out bowls of rice and geng. The moment he sets the king's meal in front of him, Kaiwang scoops up a massive handful of rice and shoves it into his mouth.

"Disgusting," Wangdue mutters. "Does he always eat like a pig?" He and the Prime Minister have gotten into the habit of speaking Min when around the boy. They've picked up enough in Hangzhou to be conversational. Kaiwang, born and raised in the city, can't understand a word of it.

"Oh yes," Wangyi says. "You don't know how lucky you were to have been gone the night our chef made peanut worm jelly. It was delicious, of course, but watching him eat it..."

Kaiwang chews the wadded glob of rice that prevents his jaw from functioning. After some effort, he says, "Whatcha guys talking about?"

"Yaaaaaawn. Wake me up when you get to the war." The boy goes back to his meal with redoubled energy.

Wangdue casually picks up his chopsticks and geng spoon. He turns to Wangyi, absently as possible... may as well test the waters. See if the Prime Minister will bite.

"I think," Wangdue suggests, "something ought to be done about that one. Before he can cause too much damage."

Wangyi slurps a spoonful of broth. He glances at the Chancellor innocently. "I think the idea deserves some consideration."