The "war" with the Jurchens—really, a series of defensive maneuvers meant to prevent a war—at first proceeds according to plan. The Thais and the Lusong islanders grant Song military access, hoping the Chinese may prevent an invasion of their recently-acquired lands. The Song armies march north to the Thai colonies, instructed to look menacing on the Jurchen border but not do much else.

Meanwhile, with the blessing of the Minister of Taxation, Wangdue takes the opportunity to raise war taxes. The boy's ascension to the throne has caused many to lose faith in the country's favor under Heaven; as a result, the military requires much more money to maintain than it did before. Cutting its size, however, is not an option until the Jurchen situation is resolved. 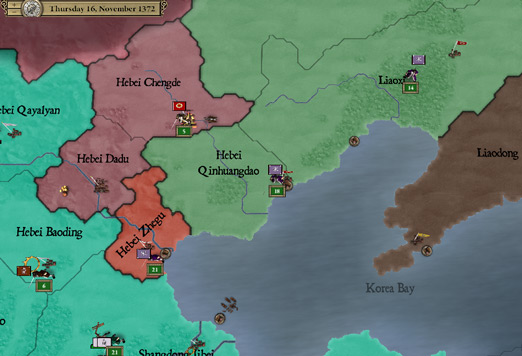 Song troops, along with a handful of Tianwan and Zhou, arrive in the north by November. They line the coastline in case retreat becomes necessary. The soldiers do as they're told and do not venture outside of the safe zone. Only a handful of men are sent over the border: spies from Hangzhou, dispatched to assess the barbarians' strength. Their reports are grim. 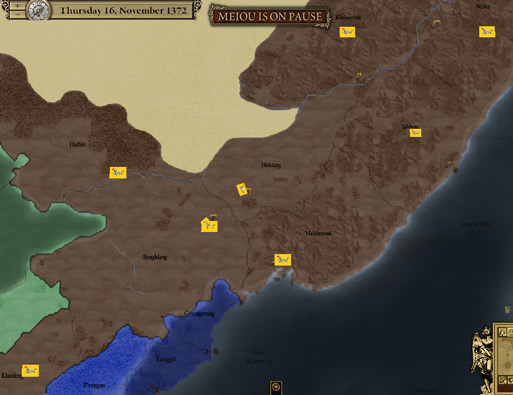 Kaiwang, however, grows more unmanageable every day. By the end of December, his incessant complaining begins to transform into outright hostility.

"No!" The child bangs his fist on the council table. Wangdue and Wangyi exchange glances, more than a little worried about their king's state of mind. "No no no no no!"

"Sir," the Prime Minister says in as soothing a voice he can muster, "the time is not yet ripe. Perhaps in the spring the troops will be rea—"

"No! I'm the king, and I want my war!" He bangs both fists now, face growing red with blood, eyes devilish and crazed. Yet despite his infantile temperament, he doesn't issue orders, simply waits for an answer from his elders.

"Sir, the Chancellor and I are doing the best we can right now..."

"Well it's not good enough! I want my war! I want it I want it I wa—" The tinkle of a bell in the next room stops Kaiwang cold. His eyes turn to glass. A spot of drool seeps out of the corner of his mouth. The dinner bell. At once, the boy leaps out of his seat and dashes out into the hallway.

Wangdue buries his face in his hands. "Wangyi."

The Prime Minister chuckles and fetches the jug. They've been stashing them around the capitol, anywhere they tend to run into the young king. It doesn't exactly help matters... but it's better than the alternative.

Pouring them each a cupful, Wangyi says, "You think he'll realize someday that he can just have us executed?"

They clink their cups and drink.

"How's this for an idea," Wangdue says. It's become a private game of theirs. Envisioning situations under which they might legally replace Kaiwang. "We find a bastard of Lin'er's."

"I'm not saying one exists, I'm just saying, we find someone willing to... claim..."

Wangyi leans in toward his chancellor. "Have you," he says, swirling his drink, "thought of being king yourself?"

Wangdue's eyes narrow. He gazes through the bureaucrat, piercing him, not sure what the man means by asking the question. "No. Why?"

"Just a thought." Wangyi leans back in his chair. He casually sips his drink. "I mean, I think you would make a good one. I... I would back you."

What is this man's game? Is he probing for some treasonous thought? Or actually proposing...

"No. As... difficult as Lin'er's idealism and this boy's idiocy have made made it, my responsibility to is serve their kingdom and their line. A steward of sorts. Anyway, with my vows, I'd never be able to produce an heir."

"The same vows that let you have these drinking sessions?"

"I doubt the Supreme Buddha Himself would be able to do this job sober."

Wangyi pauses for a few moments in thought. "So you mean," he says, "you've never... been with a...?" The Chancellor doesn't understand his meaning. Wangyi then raises his eyebrows suggestively, sending Wangdue into a fit of laughter.

"My dear man, I knew enough to take the vows after, rather than before."

They share a few more laughs and more than a few drinks before retiring for the night. Wangdue finds under his doorstep a letter from his chief spy, just as he'd hoped. But there isn't anything new to report. Whatever Li and Wangyi discussed, neither has said a word about it to anyone else. Watertight.

Wangdue and Wangyi confer with their new marshal on the matter of the war. Kaiwang sits in the corner of the room, doing whatever it is he does, when an idea crosses his mind. "Hey... Marshal? I'm the king, right?"

The marshal glances at Wangdue and Wangyi nervously. "Y-yes, Sir..."

The boy's face brightens. "Ok! Tell the armies to attack the Jurchens!"

Visible sweat appears on the marshal's forehead. He glances back and forth, between the men running the country and the boy nominally at the head of it.

"Disregard that order," Wangdue says. "Not of sound mind."

"Nuh uh," the boy retorts, pointing a pudgy finger at the Chancellor. "He can't do that!"

"Sir," Wangyi tries more gently, "you ought to reconsider. The Jurchens are much stronger than us... if we attacked them, they would crush us and then destroy the whole kingdom."